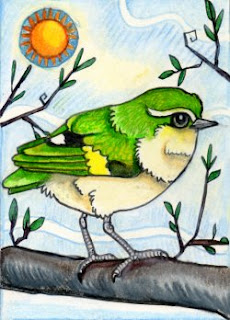 This delightful wee chap is New Zealand's smallest bird. He is a member of the NZ Wren family, which are not particularly related to the more cosmopolitan wrens, but merely bears a superficial resemblance to them. The male is small and green and pretty, whereas the female is a more dowdy brown. Both move with quick flicks of their wings, darting from tree trunk to tree trunk, pipping away to one another as they hunt for tasty grubs and insects. Their habitat is thinly wooded native forest, and I have seen them both in Peel Forest (Canterbury) and near Harwood's Hole (Takaka Hill). They are hole nesters, laying their eggs in cavities within trees, sometimes with entrances so narrow that even this diminutive bird has a tight squeeze. The nest has a dome shape, and she lays 4-5 eggs which take around 2 weeks to hatch.

Their only extant relative is the Rock Wren, which looks similar but is slightly larger and makes its home above the treeline, in the alpine region, and once there was also the bush wren, which favoured the denser native forest and is now, sadly, extinct. Other extinct relatives include the Stephen's Island Wren, an entire species that was wiped out more-or-less by one Lighthouse Keeper's cat. It is a tragic story and demonstrates how vulnerable to mammalian predators are natives were - and still are - especially those with very limited range. Also, why people shouldn't keep cats!

People often assume that because I love animals, I would have lots of pets. I don't. Although I would one day like an indoor cat, I don't keep cats because I like birds, I don't feel I have the time and attention to devote to a dog and keeping birds in cages is just plain cruel. I once wanted a ferret, but they are now no longer permitted to be bought/sold/bred in New Zealand because of the risk of them escaping.
Posted by LemurKat at 6:22 AM