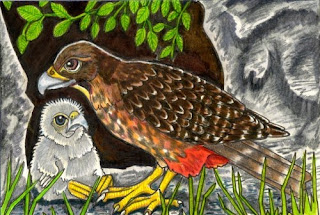 This falcon is our only extant endemic species of raptor. She prefers forested areas but can also be found in open country. Across most of New Zealand, alas, she has been largely displaced by the self-introduced Swamp Harrier of Australia. Her main diet is birds and the occasional insect, although females are large and strong enough to take the occasional young rabbit. Males are, like in most raptors, more diminutive. When hunting, she dives steeply onto her prey, seizing it in her talons. This victim is then taken to a handy "plucking post" where she dislocates its neck using a special notched "tooth" found in all falcon species. She then plucks it naked, and devours it hungrily. Threatened by habitat destruction and pesticides, Karearea has found an unlikely ally. She is being encouraged to breed - and especially to hunt, in vineyards. She is a naturally occurring way to keep down small birds that might otherwise make a meal of the grapes. In a dive, she can reach 200 km/hour.

In breeding season, the male chases the female, pretending to attack her. They then engage in some aerial acrobatics before he seals the bond by making her a gift of something juicy and dead. He encourages her to chase him (luring with the food), leading her to his chosen nesting place. This is generally a sheltered cliff edge, a well positioned epiphyte or somewhere on the ground. The eggs are laid, and the parents fiercely defend their nest from intruders.
Posted by LemurKat at 10:46 PM