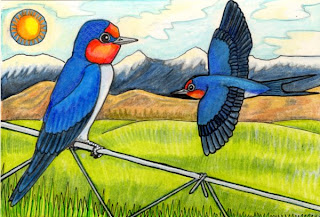 Welcome Swallow
Like the Australasian Coot and the tiny Silvereye, the Welcome Swallow brought itself to New Zealand and decided to make its home. Before the 1950s they were occasional vagrants, and then some started breeding and they are now distributed across the country and a common sight. They favour open grasslands and above water, where they dart and flicker in pursuit of their insectile prey. There is something almost magical in their flitting dance for food. Courtship involves hovering, fluttering and chasing one another through the air and when the pairing is cemented, the nest is build. These are often under bridges, eaves or inside the mouths of caves. They are built of reguigitated mud and resemble an upside-down igloo. Inside they are lined with soft down, wool and grass. They are short-lived, fast breeding birds - which explains their swift spread across the country. They typically lay more than four eggs and can hatch and raise three sets of offspring a year. The longest lived known swallow was six years old. 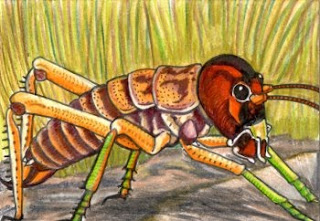 Mountain Stone Weta
Sturdier and more thckest than its cousins, the Mountain Stone Weta makes its home in the drier part of the South Island's high country. It is quite verastile, equally happy in shrubland, alpine grassland, scrub and scree. Groups are often found clustered together under loose slabs of schist. As the alpine area is prone to freezing temperatures, the MS Weta has some amazing adaptations. It can withstand being frozen solid to temeratures cloes to -10 degrees celsius and can thaw out and become active again. It is the largest insect to do this. These are long-lived critters too - taking 3-4 years to reach maturity and then living through up to 4 breeding seasons. Eggs are laid in autumn and hatch in spring. 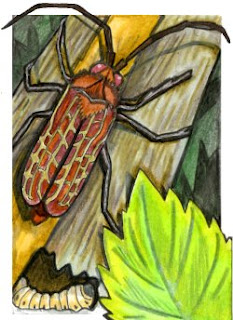 Huhu Beetle or Tunga rere
The bulkiest and heaviest of the New Zealand beetles, the huhu is easily recongnisable and frequently seen. It usually makes itself at home in forests - ranging from the wet podocarp forests to the drier woodlands and is quite an active flier. Bright lights lure it in, and often sends them crashing into windows. And be careful if you get one in your hair or clothes - they can deliver a nasty nip! The grubs are a great source of protein and were often eaten by the native Maori and by more adventurous visitors at the Hokitika Wild Foods festivals. They are said to taste nutty. Thick and white and creamy, they do not look particularly savoury and they hatch from eggs laid in decaying dead wood. They are an important part of the ecosystem, as they break down the wood so that decomposition can advance. Once they have pupated and become adult beetles, they no longer need to eat, but can live up to two weeks - mating and laying their eggs for the next generation. 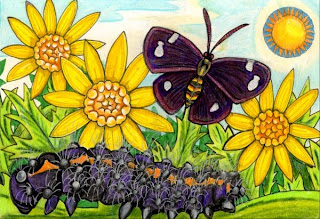 Magpie Moth or Mokarokara
This pretty pied moth is diurnal - meaning it comes out during the day. It is endemic to New Zealand and widespread throughout coastal and lowland areas across both the main islands. The butterfly can be seen flitting around gardens from September to June and lays its eggs on the underside of groundsel, ragwort and cineraria. The fuzzy black caterpillar is often referred to as a "woolly bear" and they are voracious eaters, being known to defoliate one plant and have to crawl off in search of another. This makes them unpopular with gardeners, but does act as a good weed control on the wild pests! After they're good and fat, the caterpillar leaves its food plant and wanders off to spin its cocoon - usually in ground litter or crevices in wood. After 7-7 weeks, the butterfly hatches out. The diet of the caterpillar and moth make it taste bitter and foul and thus they are not considered a food source by hungry birds or lizards.
Posted by LemurKat at 10:13 PM