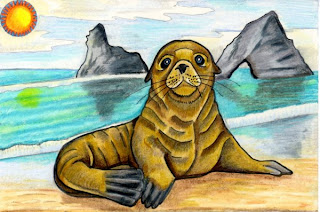 Now known as the "New Zealand Sea Lion", this seal is endemic to New Zealand and steadily declining in number. Its restricted breeding range makes it one of the most vulnerable to extinction. The major breeding site are the Auckland Islands. This small archipelago is in fact nowhere near Auckland, but sub-Antarctic, with the nearest being 465 km from Bluff. Outside of breeding season, the Hooker strays across to the mainland around the Foveaux Strait and as far up as Otago. Squid, fish and octopi constitute the majority of their diet, and they can venture 175 km from the coast to forage. Dives can measure anything up to 600m, but are usually less than 200m and last 4-5 minutes. The male is considerably larger than the female, and starts defending his own territory and harem at around 8-9 years of age. Females determine their mate based on the size and quality of the beach territory he holds, and he defends his girls with great ferocity and determination. Occasionally younger or weaker males lurk around the perimeter, hoping for a piece of the action. A single pup is born to each cow every 1-2 years. It is born on the beach and moved into the vegetation as it grows older - around 6 weeks. At this point the bull has gone off back to living the bachelor lifestyle, and mum and the other cows are left to raise the young by themselves. The cows alternate between suckling their young and foraging at sea, with the pups left together in small pods awaiting their return. They remain dependent on their mother's for the first year.
Posted by LemurKat at 9:03 PM