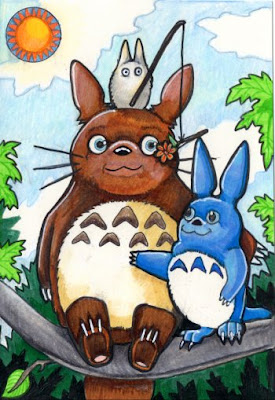 So where are numbers 2503-2506? Well, I've not gotten around to uploading them yet, but time will tell.
This is our friend Totoro and his two fluffy companions. They were drawn for Okami, in Moldova, who (like me) enjoys Studio Ghibli films. I hope this brings a smile to her face. It was referenced from a screen shot but I added my own style to the characters.

So what do you know about Moldova? Moldova was once a part of the Soviet Union, but is now a country in a troubled state. Indeed, my mother is knitting jumpers for an Orphanage over there. According to Okami, it is a land of endless hills covered in crops and numerous rivers. Also, mixed forest (temperate, I guess) and more recently, hot weather and floods. I imagine that given its location it must also get very cold in winter, hence the collection of jerseys etc that is being undertaken in NZ. According to Wikipedia, a quarter of the people live on less than US$2 a day. It strives to become part of the EU and I hope it suceeds.