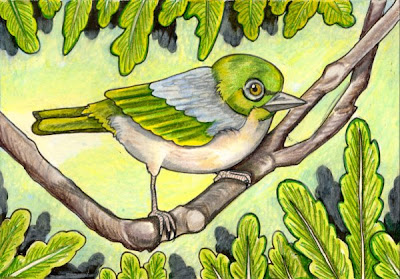 This diminutive birds (shown here about life-sized) came to New Zealand the hard way - on their own. They are one of our later immigrants, arriving around 1856 and making the Chatham Islands their home. After this, they moved to the mainland and are now wide-spread across the country, and also a fairly common sight in the urban environment. So how did this little bird make such a big journey? Flocks of them were swept across by powerful winds. These winds only blow from Australia to New Zealand - there was no chance of them being swept back. How such a small insect-eating bird survived such a long journey just goes to show the tenacity and strength of this tiny fellows.

Silvereye are a member of the Zosteropida family, which are widely distributed across a number of continents and islands. Their favourite foods are insects, nectar and berries, and the former made them popular in orchards, where they snack on the pesky woolly aphis. Of course, they also enjoy the fruit! They travel in small flocks, making distinctive rapid warbling conversation and flashing swiftly through the trees. In spring and early summer, they pair off and build cup-shaped nests which resemble hammocks. In these they lay their eggs and raise their offspring.
Posted by LemurKat at 9:23 PM