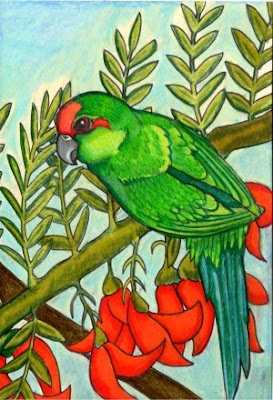 Once the Kakariki was a common sight in New Zealand's native forests. Large flocks would flutter through the trees, chattering loudly as they foraged for fruit, seeds and shoots. Whiteheads (in the north) and Yellowheads (in the south) would hang around the flocks, snatching up any insects they disturbed. Now, however, their chatter is silenced. They are still there, in our more undisturbed forests, but you'd be hard-pressed to find them. Like many of our natives, the Kakariki were damaged significantly by the introduction of mammalian predators. Rats would steal their eggs and chicks, and stoats gobble up the adult birds. Like most parakeets, Kakariki are hole-nesters, and this makes them vulnerable to a visit from Mr Stoat. Kakariki is the Maori word for "green" - specifically THAT shade of green and there are three distinct species - the yellow-crowned, the red-crowned and the somewhat more controversial, orange-crowned (more recently proven to be a species, NOT a hybrid of the two). 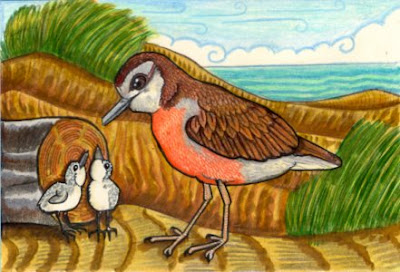 The New Zealand Dotterel or Tuturiwhatu is another of our natives that was once widespread and is now in decline, thanks to the European invaders. However, in this case the damage is mostly due to humans themselves. Dotterel live, love, breed and feed on the coastal shores. They are easily disturbed - especially in breeding season, by dirt-bikes, dogs, curious humans and of course the introduced mammalian predators. As the eggs are laid in a hollow on the sand, they can easily be crushed by a dirt-bike, horse or unwitting human. If a predator comes near the nesting bird, her partner puts on a bit of a show, pretending to be mortally wounded. Dragging his wing, flopping helplessly, he lures the predator away from the nest site. Once he is a safe distance away - or the predator gets too close, he flies off, making a high pitched chip-chip call and, of course, away from the nest.
Posted by LemurKat at 10:14 AM