The term "Shag" actually refers colloquially to cormorants that exhibit a crest. So I would like to introduce you to one of our endemic Shag species - the Spotted Shag or Parekareka: 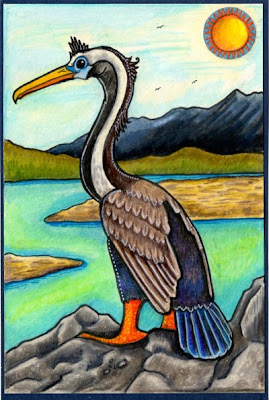 Why is it called a Spotted Shag? I'm not sure - surely "striped" shag would be more appropriate? Whilst it does have a slight haze of speckles in its grey-white chest and a few brownish spots on its wings, this handsome fellow is not what I would describe as "spotted". So I shall henceforth refer to him as Parekareka instead.

Parekareka is a coastal shag, preferring to make his home on rugged, rocky coastlines and not delving inland like some of his non-shaggy Cormorant Cousins. He builds his nest on craggy ledges . But before that, he must put on his finery and find himself a mate. In breeding season, adult Parekareka colour up - their facial mask deepens in blue-ness, their crests grow larger and more erect, the spots on their wings (aha!) more pronounced. Their black feathers grow in glossier and blacker, the white grows in more pure with a touch of blue-green. White filoplumes adorn their wings. And now, in their fine attire, they seek their mates.

After the nest is built, the plumes fall out, their crests moult away. As the eggs are laid and the incubating commences, the vestiges of beauty and courtship are cast aside. When the eggs hatch, the parent birds go forth and bring them back mouthfuls of half-digested fish and crustaceans, which the youngsters greedily bolt up.

Outside on the rocks, the gulls wait.

After the parents have departed, aggressive red bills sometimes fly to the nest, bullying the youngsters until they disgorge their meal. Upon which, the vicious pirate scoffs it up! This nasty procedure continues until the young shag exceeds the gull in size and dominance is no longer possible.

When the youngsters are fully fledged, large parties of them, accompanied by their parents, make long journeys up and down the coast. Here they learn to fish and feed for themselves.
Posted by LemurKat at 10:16 PM