The Bear and the Bees 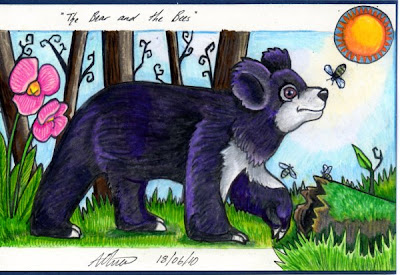 Bear was hungrily hunting for berries in the forest when he stumbled upon a rotting log. Nosing at it, he scented the rich, tasty scent of honey. Now, honey was Bear's favoruite food. Carefully he nuzzled the log, trying to see if the stinging inhabitants were home. At just that moment, a Worker Bee buzzed in, returning laden with nectar. Upon seeing the bear and realising its intent, she sacrificed herself by stinging him sharply upon the snout, warning him to be on his way. At this Bear flew into a dreadful rage. He ripped at the log, breaking it open with his sharp claws. Immediately the bees swarmed out, furious with him, stinging and buzzing and stinging some more. Bear fled, stampeding through the forest until he found a small pool of water and dove in.

It is wiser to bear a single injury in silence than to provoke a thousand by flying into a rage.

A fable by Aesops. The Bear is a Sloth Bear from Asia. This postcard is going to Uganda, of all places.
Posted by LemurKat at 11:37 AM