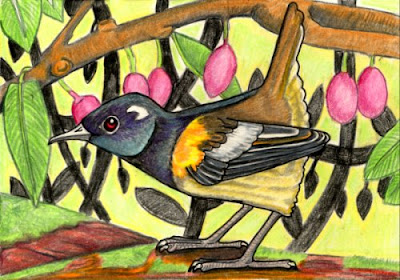 This is a male Hihi, also known as the Stitchbird. The name comes from his call, which sounds very much like "Tzit-tzit". It is one of our three Honeyeater species and the most endangered. The other two, the Tui and Bellbird, are still fairly widespread across the mainland, but the poor wee Hihi is now limited to offshore islands. He rarely lands on the ground, and spends his time flicking through the canopy, supping nectar from the smaller flowers. In areas where Tui and Bellbird, both larger and more aggressive species, are found, he will favour the lower quality flowers. Stitchbirds are unusual in that they mate face to face. Male Hihi are notoriously aggressive. The eggs are laid in tree hollows, another oddity for honeyeaters. This also makes them vulnerable to predators. Genetic analysis now shows that they are not as much a part of the Honeyeater family as was once believed, and have now been given their own family name, Notiomystidae. This analysis has proven that they are in fact more closely related to the wattlebirds - kokako, saddleback and huia, then the Honeyeaters.

This postcard is my sole contribution to "Drawing Day". I met up with the other Drawfest memebrs in the library at 1.30 pm today after taking some photographs around town, hunting down derelict buildings and interesting signs. Not a lot to be found in the building line, to be honest, but I was quite proud of the two signs I photographed. Once again, I was the oldest, but today they were all drawing Pokemon. I did not contribute, choosing instead to add to my NZ natives collection of art in preparation of my best book yet. This wee fellow, perched in front of a fuschia plant, took around 2 hours from start to finish. I am not sure where in the world he will end up yet, but you can be sure he will be taking a long flight!
Posted by LemurKat at 9:21 PM