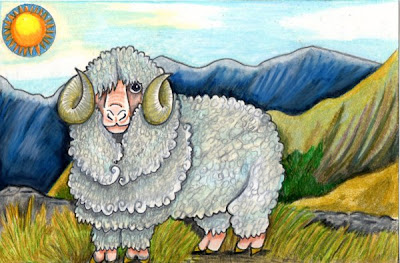 The Merino sheep is a breed of sheep that is famous in New Zealand. It is a great, shaggy sheep producing a goodly quantity of warm, thick wool. One sheep in particular made headlines a few years ago. Named "Shrek", this castrated male sheep evaded mustering for six years, living in a cave in the high country. When they found him he was a great, big, shaggy, matted mess of wool. He was carrying around 27 kgs of the stuff! If he lived anywhere but NZ he probably would have been eaten by wolves or otehr predators, if they could find him under that wool. Only in New Zealand can a sheep become famous just because he lived as a hermit for 7 years. Shrek has retired from the limelight now, but is currently touring NZ to make a new book. If he was not a media-love, he would have been turned to mutton. So, go Shrek!

PS: This is not Shrek, as I drew it with horns, Shrek doesn't have them - presumerably because he's castrated.
Posted by LemurKat at 6:49 AM