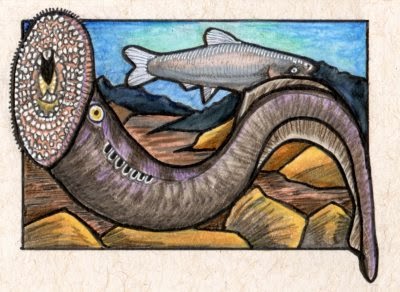 Despite his reputation, not all species of Lamprey are blood-sucking parasites. This one, the Sea Lamprey however, is. Lamprey are primitive, jawless fish, who instead of a mouth are equipped with a tooth-rimmed suction-cup and a sharp tongue. Once he locates an appropriate host, he latches on and begins to scrape away at the skin with his tongue and teeth. He secretes a substance that prevents the host's blood from clotting and it will eventually succumb to infection, if it doesn't die of blood-loss first. This fish spends his early days in freshwater, moving into lakes or a marine environment to feed parasitically for a year, before returning to the river to spawn and die.