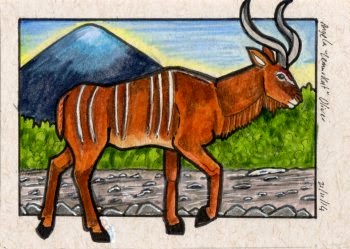 The Kudu are two species of large woodland antelopes. The Greater Kudu can be found in eastern and southern Africa. Here the females form herds with their calves, whereas the bulls lead a more solitary existence. Only the male sports the long, curling horns and these are used for disputes over mating privileges. Generally the two males will lock horns and wrestle until one surrenders but on occasion they will become trapped together. If this happens they will either starve to death or be killed by a hyena or other large predator.