Today's critter is more-or-less by popular request, and also because I needed an "invasive pest" to introduce into the forest portion of my TCG. Hence why we are dropping out of the alphabet, temporarily. 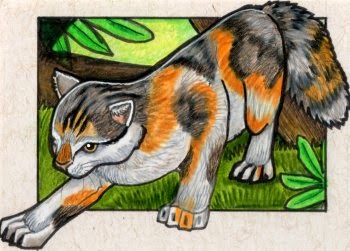 A Feral Cat is not just a domestic cat that is living wild, and it is not a stray - when a cat truly "goes feral" she is like an actual wild animal. She has never been socialised with humans. This probably means that her ancestors were strays. Feral Cats can be found in urban environments, as well as woodlands, temperate forests and open countries - anywhere there is relevant prey. Whilst in urban areas and some suburban, she can do little harm, it is isolated habitats that suffer the most impact from her introduction. Many islands are home to birds and small mammals, but may lack in mammalian predators, and for these the addition of this feline - an apex predator - spelled disaster. The extinction of six New Zealand bird species can be attributed to cats. The most well known of which is the Stephen Islands Wren. A tiny bird, almost flightless, and the entire population lived on one small island. There are tales that suggest one cat was responsible, but it is more likely that it was a plague of feral cats, some related to the lighthouse keeper's cat who was probably not called Tibbles) or otherwise dumped on the island. Within a few months the birds were gone.

Domestic cats are interesting in that they are one of the few sociable cat species. Unlike their ancestors, the European wild cat, they will share territory, although unneutered males will fight for dominance. A colony of cats is called a clowder. In some countries, like New Zealand and Australia (where the felines have had a detrimental impact on native mammals) there is talk of banning cats, and hunting ferals is encouraged. However, many people adore our feline companions, even the ones that utterly shun human contact, and the idea of killing cats is anathema. Some countries, including New Zealand, run a trap-neuter-release program, in which ferals are captured, neutered and then returned to their initial habitat. This means that the cat can no longer breed, but can still kill millions of birds, reptiles and bats before eventually sucuumbing to disease, injury or death-by-auto. Sometimes feeding stations are set up in which volunteers feed the half-starved felines. Needless to say, there is a lot of controversy surrounding such projects.