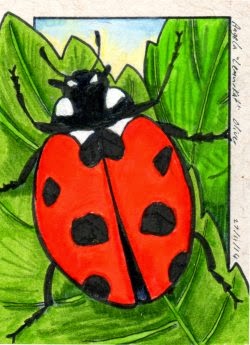 There numerous species of Ladybird - over 5000 -  found all over the world. Most are characterised by their colourful elytron (wing covers) which in many species are spotted. Some species are vegetarian, and have become something of a pest in agriculture, but most species favour a carnivorous diet with a particular fondness for destructive insects such as aphids.  As such, they are generally regarded as the gardener's friend. Although, introduced Harlequin Ladybirds are currently engaged in a full-on invasion of the United Kingdom, where they are spreading at a rapid rate and out-competing their native species.