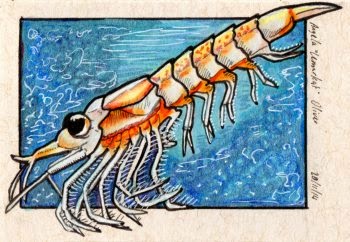 Krill are tiny crustceans occuring in every ocean, worldwide. They play a critical role in the ecosystem. Krill feed on phytoplankton, and occasionally zooplankton. In turn they are preyed  upon by fish, mammals, birds, cephalopods and other arthropods. During the night they migrate towards the surface, sinking deeper into the depths during the day. More than half the population is predated each year, requiring a fast and fecund life-cycle. Climate change poses a threat to Krill populations, as can other disturbances.