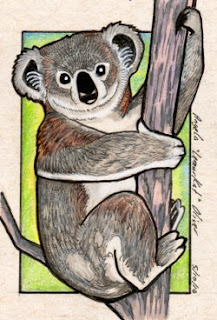 The Koala is a arboreal maruspial. His diet consists predominantly of eucalyptus leaves. These leaves have a high water content, meaning he does not have to drink often. They are not, however, provide much energy and the Koala spends up to 20 hours of his day asleep with short periods of active feeding spread throughout. He does not travel far, and will often stay in the same tree for an entire day. Asocial in nature, he does not willingly interract with others outside of the mating season. Mating is noisy and often brutal, with the female fighting off her potential suitors and the males fighting amongst themselves. She will eventually sucuumb to the most dominant.

So that's it folks, this cute and cuddly animal is in fact lethargic, viciously antisocial and prone to forcing copulation - sometimes with females who aren't even in oestrus.