The best time to drive in San Francisco is sunday morning. As we check out, I dart outside to check out the traffic. "Tim," I cry, "let's drive!" There's virtually no traffic. We remove our car from the Parking building, paying over $60 for its release. Tim wouldn't follow my advice to "just lose the ticket" in which case they would charge us the daily maximum of $34. Besides, there's noone there to pay it to, we have to use the machine. After reading reviews of the parking garage that said sometimes the ticket wouldn't then open the gates (forcing you to pay twice), I hold my breath until we're out on the street. At my request, we head towards Lombard Street. We saw it kind of last night, as the bus took us past it from a few blocks distant. It is really a remarkable street: 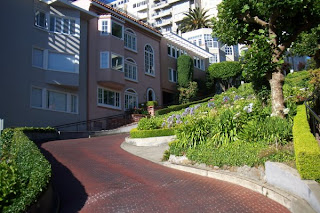 As we watch someone twisting their way down it, we decide not to attempt similar behaviour. After that, it's back to being she-who-reads-the-GPS as we make our way up to the Twin Peaks. Which I am a little disappointed has nothing to do with the movie and everything to do with it being... two peaks. Today is the day of the PRIDE parade and a group of workers are installing a giant pink triangle on the hillside for all the city to see.Twin Peaks offers panoramic views of San Francisco. 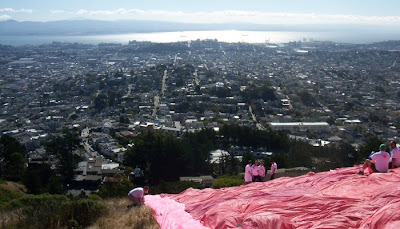 Oue route back is almost more complicated than our route there - as the GPS is programmed for shortest route, not fastest, and keeps directing us up steep, narrow streets, until finally we get back onto the main roads and head across the Bay Area bridge and into Oakland. Oakland is actually rather nice looking, but we are told later that it has one of the highest crime rates in the US.

We meet up with Baybird and Rignard at a little breakfast place called Mama's Royal Cafe. The food is reasonable, the place quite popular. There is napkin art on the wall. I doodle a crow on my napkin, but it's not really worth conserving. Baybird is joining us on today's expedition - but Rignard, alas, has to take her car in to the mechanic.

Heading south, we move out of the Oakland area and into San Jose, where we are visiting the most interesting example of architecture I have ever seen (unless I get to Hearst's Castle) - the Winchester Mystery House.

It is a fascinating place - Sarah Winchester was married to the fellow that invented the Winchester rifle and had some interesting beliefs. The popular one is that the spirits of those killed by the rifle would come after her, unless she kept adding rooms onto her house. This she did with little regard for common building codes and also without much knowledge of actual architecture. Thus we have doors leading to walls, the staircase to the ceiling, a door opening to a 10 foot drop into the kitchen, a window hiding behind a cupboard, several "illegal" elevators and many, many rooms. We visit a number of them, but are not allowed to take photos. Because Sarah Winchester was very short and had arthritis, she had custom made "easyride" staircases, that are very narrow and have very shallow steps, meaning that walking up them means taking a number of switchbacks.

After the house, we tour the garden, and here we are allowed to take pictures to our heart's desires. And so we do: 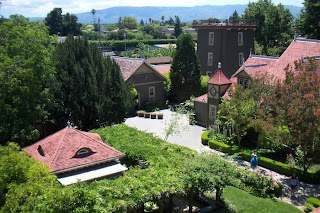 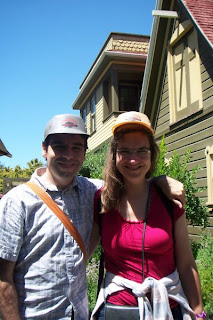 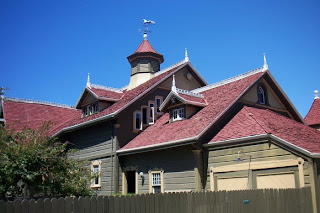 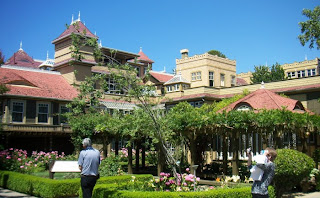 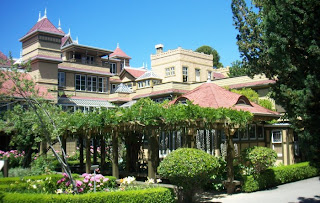 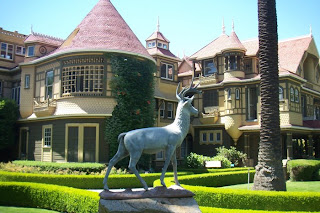 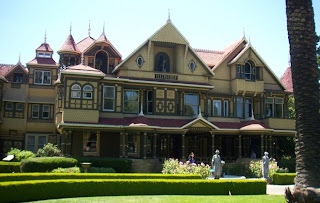 After the Winchester House, we drop Baybird off at the train station and head south-west to tonight's lodgings - in Monterey.The drive is beautiful. After we get off the freeways and into the open roads, we drive through pastures and wetlands that teem with birds. I itch to get out with the binoculars, but such delays are not to be. We do pass a great white heron standing as still as a statue and then fields and fields of strange green vegetables - which turn out to be artichokes. As we approach the Monterey bay area we see the beautiful blue waters of the bay, sunlight dancing across the surface.

Monterey Bay is gorgeous. We take a stroll down the famous Cannery Row and have dinner at a seafood restaurant overlooking the bay. Below us children laugh and play, splashing in the water and gulls call and wheel in the sky above. There is an atmosphere of peace, the laidback feeling of summertime at the beach. I dabble my toes - so I can say I stepped in the Pacific ocean. It's cold. 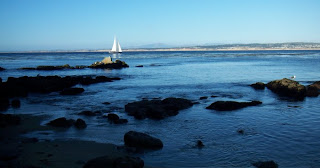 We stroll back, visiting the supermarket before spontaneously deciding that we should really watch the sunset. Jumping in the car, we race alon the ridge of the hill, into the charming township of Pacific Grove and park near a lighthouse, watching the sunset over a golfcourse. After the sun has set, and the sky is painted in the darkling stages of twilight, we move further down, and find the beach. Kelp beds out to sea could harbour sea otters, and the gulls have come in to roost. Driving back through Pacific Grove, I fall a little in love with the place. The houses are gorgeous - the sort that rich folks, or celebrities, might use as a holiday house. One day, if I ever become particularly rich or successful, I will have a house here too. One higher up the hill, where the tsunami risk is lessened.

All in all, it was a pretty perfect way to spend my birthday. Although I think, next time, I shall stay at a rather more upmarket accommodation, and not a backpackers hostel.