Today we set out to visit the Seattle Centre, home of the Space Needle and a number of other venues, including the EMP- the Experience Music Project museum - which also includes now a science fiction display.  It is a fascinating building, made of stainless steel and aluminium shingles that have been individually cut and shaped. Inside it is equally as surreal. 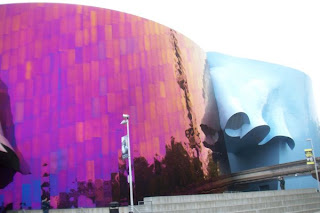 The first exhibition is a tribute to Seattle's most famous band - Nirvana, and the grunge music genre. As this also harks back to my teenage days, I found it quite nostalgia inducing, as bands I had not heard of in almost 20 years were mentioned - Dinosaur Jr, Mudhoney... There was a collection of letters from the band - letters sent out to their fan club members, illustrations by Kurt Cobain, photographs of them all looking long-haired and filled with enthusiasm at their future prospects. All rather bittersweet, when one considers what happened to Cobain. The display cut off partway through Nirvana's journey, leaving Kurt with a pregnant Courtney Love. Props - such as the anatomical angel and broken guitars, also made up the exhibit.

After that we followed the history of the guitar; whizzed through Hendrix and admired the tower of musical instruments. 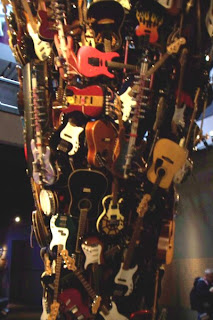 Then it was down into the Avatar exhibit. It began with a short documentary on how it was made, which was very interesting and in the actual exhibit there were various props and models from the movie, plus a number of interactive displays. 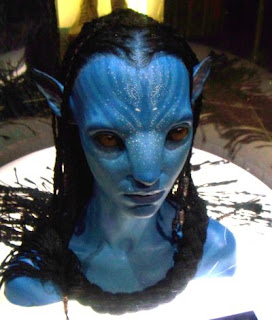 Downstairs, in the basement, we entered into the Chamber of Horrors, well, it wasn't that scary, really, but it explored the history of the horror movie. I was somewhat offended to see "Twilight" listed in the Vampire category. The only horror-esque thing about that movie is the acting.

Tim was more taken by the Science Fiction exhibit. It even paid tribute to one of his favourite authors: 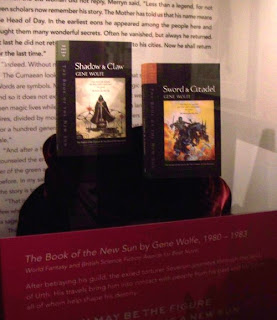 And here's the original Enterprise chair. Complete with Tribbles. 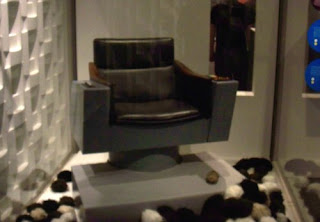 For lunch, we ate at PIE, where we found, for sale - real meat pies, somethig of an oddity in the US. They were a bit of a weird shape. They weren't bad, but they do make 'em better (and cheaper) in New Zealand. 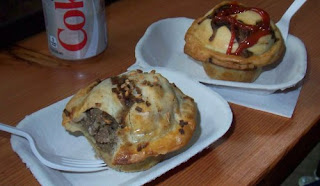 After that it was across to the Pacific Science Center. This is an older museum, and it did look rather dated. The dinosaurs were relics from the mechanized era - back before raptors had feathers. They groaned and jerked their way through their repetitive movements. I remember seeing a display like this when I was little - and it was the most exciting thing ever. 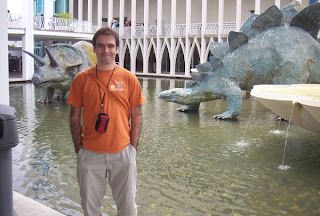 The insect display was quite interesting. Their were plenty of bugs - including a gigantic preying mantis (okay, so that one was a mechanoid too) and I finally found an animal that is truly, really ugly. At first I thought they were baby rats, scrambling through a maze of perspex tunnels. But no, they were naked mole rats. These are not attractive critters. The fact that one was kicking faeces in the bathroom chamber only added to the lack-of-appeal, along with the constant grinding sound as they gnawed at the cement blocks that blocked off some tunnels (to keep their teeth short). A sign proclaimed that naked mole rats are a social species and, despite a popular culture show, do not make good pets. I am guessing the show was Kim Possible. Naked mole rats have a social structure not disimilar to bees. Luckily, the perspex pipes made it next to impossible to get a good picture, so you are not forced to look upon their hideous nature. The Madagascar hissing cockroaches were much prettier.

The Butterfly House looked rather lovely - if one did not look up to see all the dead butterflies trapped in the wire ceilings. Tropical butterflies of every colour flitted back and forth. They import in the chrysallises and hatch the butterflies here, but the butterflies here do not breed. Just fly, and drink nectar (or juices) and die. Kind of sad really. 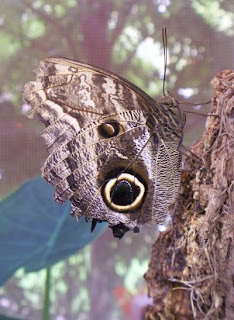 There there were intereactive game and science rooms and puzzles, which kept us entertained for a good wee while.

Once we were done there, we caught the monorail to the Westlake Centre, where we disembarked and walked through a forest of blue trees, where silent, adrogynous sculptures went about their business. 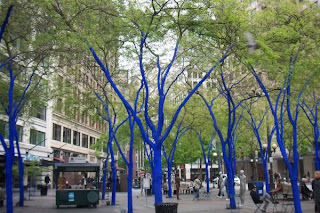 The library of Seattle had been recommended as an interesting place to visit. Ten storeys tall, with the top floor affording views all the way down to the lower atrium. The floors sloped in an odd way, meaning you could walk up it in circles - like a car parking building, or take the esculators. 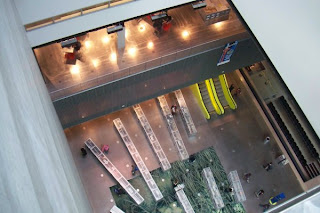 We made our way back along the waterfront, dropping into all the various little arcades and assorted gift stores. These included Ye Olde Curiosity shop - which contained two humans that had mummified naturally - through death in the desert, and a collection of shrunken heads, a two-headed lamb and a "genuine" mermaid. They had calf-skin shrunken heads for sale, but attempting to get them through customs would likely be too much bother. The mummies filled with an odd combination of fascination and disgust. We visited various other arcades - playing air hockey in one of them (I won) and eating ice creams in another, before having an early dinner in a little diner. Salmon again for me, this time with coleslaw and bread. Tim had discovered a board gaming evening in a pub two blocks away, and thus I was left in the hotel room to watch a chick-flick ("You've Got Mail") and an angry cooking show.

Tomorrow, we head to Portland.
Posted by LemurKat at 7:59 AM