I awake in the early AM, in preparation for a sunrise visit to Lamar Valley - the most reliable place to find wolves. Outside the rain still pours down, but the paraffin heater has the room toasty-warm. Restless, I pick up my kindle and begin to read by the bedside lamp. Half an hour later, it flickers once and then dies. The alarm clock also is blank. It's a power cut. With nothing better to do, I go back to sleep, sure that in an hour or so the power will be restored. By 6.30 am the day has dawned to a dull, grey morning. The power is still off. We have a luke-warm shower and I pop into the Reception to return the key and see about breakfast. No go there either, the power is out in the entire village and they have one kettle operating on their back-up generator. We decide to forego early morning hot drinks and just head out. Driving over the mountain pass, Mount Washburn (we decide against the four hour hike up it) to Lamar, the trees are shrouded in early morning mist and lightly dusted with snow. Moisture hangs in the air, although it is no longer raining. The light has a gloomy cast to it. 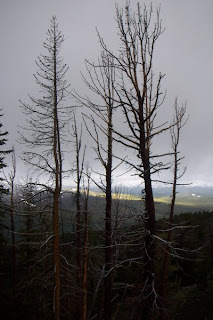 Lamar Valley, however, is spectacular.  The mist has cleared, and the sunlight now bathes the large, open meadows framed with hills and a river flowing through. Like Hayden Flats, the open areas provide ample wildlife viewing. Also like Hayden Flats, the predominent wildlife is bison. There are hundreds of them. We stop to scan with binoculars and eat our scavenged "biscuits" with a bit of strawberry jam, ever mindful of bears.

Further along we stop again, as grazine only meters from the road are one of the other beasties I had hoped to see, the Pronghorn Antelope. Pronghorns are not true antelopes, but they fill the same niche in the US as the antelopes of Africa. They were slightly scruffy looking - shedding their winter coats in preparation for summer, and appeared mostly unfazed by the spectators.

We stop at viewpoints and scan the horizon for carnivores - but not a bear or a wolf to be seen. We do spot a few elk up by the treeline, and more bison than we can count, however.

On our return journey we stop and watch whilst a herd of bison erupt from the river and begin making steady headway towards the road. For such a large beast, they can certainly move at a fair trot. Deciding it is better to wait, we stay where we are as they make their way across the meadow and to the road. They move in single file, although the pale coloured calves stay close, sometimes beside, their mothers.
Only when the entire group is across and making steady headway towards the distant herds do we continue onwards.

Next stop is Tower, which is one of the many little lodge/cabin sites. It has a tiny general store - where you can make your own hot chocolate from a packet, and a cafeteria as well. As we head towards the store, we are alerted to the presence of a red fox, trotting swiftly away. It is the one and only fox I see in the US, and quite a handsome fellow - larger than I expected, with long legs and a rather bushy tail. Alas, like most of the interesting wildlife, he's gone by the time the camera finally whirs to life.

We pause to look at the petrified tree: 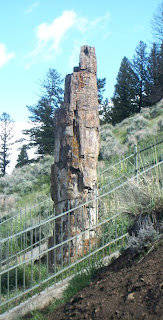 You can walk to it from the Tower lodge, but it's still a bit chilly and we're not feeling very energetic. Plus it's so early in the morning that the carpark is empty.

Further along more people are illegally parked as they observe a couple of bear cubs playing in the long grass. We do not pull over, but the scattered sprawl of cars gives us an excuse to slow long enough to take an almost-decent picture. If only the cubs were looking up! Mother bear is nowhere in sight, but I scan the far side of the road, thinking that it would be quite worrying if the cars (and onlookers) were between mother and cubs. From the two bear encounters we've had - however slight, I cannot help but wonder if I'm perhaps a wee bit paranoid about these extremely large, strong carnivores. But, then again, probably its more that the other "bear spotters" are too caught up in the thrill of seeing a wild bear to truly appreciate its awesome size and strength. I wouldn't want to be too close!

Next stop is the historic township of Mammoth. This is a quaint array of historic buildings, including a post office, visitor's centre, several shops and a restaurant. I am not overly impressed with the shops in Yellowstone, they all seem to sell the same array of stuff with only a few variations.

Elk graze on the patches if lush green grass, and praire dogs stand so still in sentinel position that I at first think one is a statue. Until it turns its head. 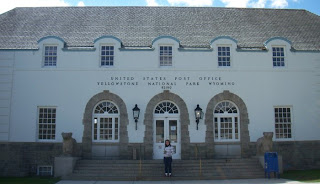 The Mammoth Hot Springs are quite imperssive. The colour of the structures is gorgeous. 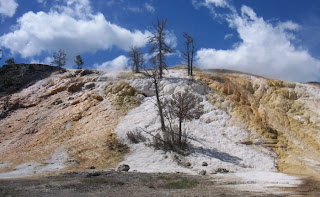 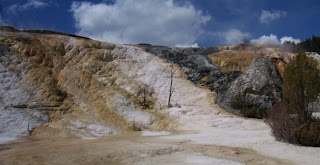 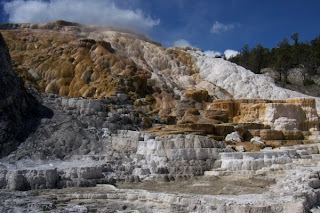 Heading south now, we stop at the Sheepeater cliffs. These are quite impressive, but the wind is fierce. Tim is feeling a little exhausted, and I decide this is prime pika territory, and thus begin to stroll down the path. Then I remember this is also bear country, and one should not wander in bear country alone. Plus the wind is annoying, and thus I turn back. I doubt there were any pika about, anyhow.

They are named the Sheepeater cliffs after the tribe of Indians how lived here. And ate sheep, obviously! 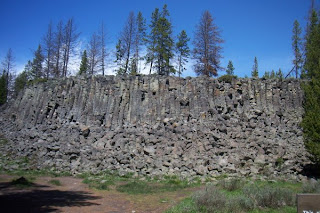 It is just past noon when we head out of Yellowstone: 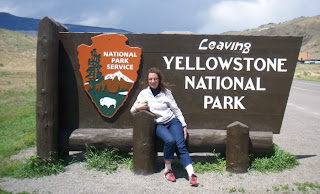 And onwards, into Montana. Outside of Yellowstone is a town called Gardiner. Gardiner is pretty tacky looking - an amalgamation of gift stores and t-shirt stores and cafes, specifically geared for those visitors to the park that do not wish to stay inside the park. We then follow the Yellowstone River north. For anyone planning to visit Yellowstone, if you wish to stay inside the park, book with Xanterra (they also do the Grand Canyon) DO NOT book yourself into West Yellowstone, because it is NOT that close to the park. It is a town in its own right. We noticed many of the accommodation places along the river had "Yellowstone" in their name.

Montana has several claims: "The Treasure State" certainly trumps Idaho's "Famous Potatoes" but it does seem to live up to its Big Sky Country Monniker. Like Wyoming, it is pink and green, unlike Wyoming, however, it is not flat and dull, but bumpy and pretty. Whilst the sky does indeed seem mighty (and rather stormy looking), the mountains seem to roll away over the horizon. And they farm bison here as well as cattle, I believe. 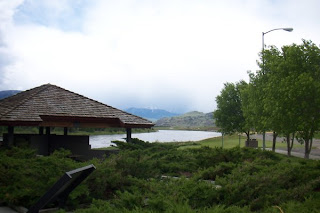 Of all the States we visited this trip (except perhaps for Idaho), I feel Montana is the one we did the least justice to. We spent only one night here, and I only took a handful of pictures through the window of the car, thus I cannot capture the Big Sky feel. The weather was drizzmal. We stopped for lunch outside of Livingston, where we ate pizza and then headed towards Bozeman and into torrential rain. Dismounting from the car and unloading in the rain, Tim somehow managed to injure his leg and because the rain did not cease, the remainder of the afternoon was spent watching cooking shows on tv* and the snow falling and melting before it hit the ground. We ate dinner at the adjoining Mexican restaurant and had an early night. There's a six hour ahead of us tomorrow.

* 30+ channels and there's still nothing worth watching
Posted by LemurKat at 10:00 PM