Florence is a new stop on our agenda - we have decided to drive down the Oregon coast to Grants' Pass instead of taking the inland route. This means we are spending only one night with WildHolly, something she has been very good about - even going so far as to say that if we decided to take the coast the whole way, she would not be upset. But I want to see her, and we have a goody bag of stuff that Els, Meran and I have rustled up from the convention.

We set off in drizzle. This is typical Oregon weather, from what I have been led to believe from literature, even if the locals argue differently. It clears up quickly as we travel west, stopping for the best chai I've had all journey, in a little coffee shop in a town whose name I cannot recall.

The Oregon countryside is beautiful - acres of golden crops, lush green fields and rolling hills. Somewhat like home, but not quite. Also, being spring it has set off my allergies a bit, but I'll cope - that's what antihisatmines are for, right?

After travelling some distance over this glorious terrain, we strike even better terrain - the coast. And it is indeed beautiful. What is more beautiful, the Oregon or the California coast? Well, I'll have to get back to you on that one - once I've seen them both!

The Oregon is definitely a stunner though! 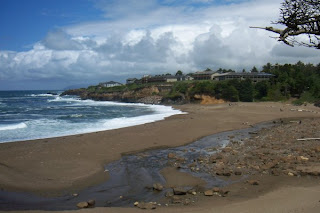 Newport is a small town on the far side of a rather elaborate bridge. We stop and grab a hasty lunch in the car park - chicken legs leftover from last night, sandwiched between slightly dry sourdough loaf. The scraps go to the greedy gulls and the crows that hover around. Then it is into the Oregon aquarium. We are going her because although we are staying in Monterey - home to a world renowned aquarium, we will not be arriving in Monterey until after it closes. And I want to see some of the local aquatic species, specifically the sea otters.

First stop is the seabird aviary, which contains four different species, all related:


One thing I found interesting was comparing the way these alcid species swam  to the way penguins swim. Alcids fill the same niche in the northern hemisphere that penguins fill in the south with one significant difference - they have not sacrificed their flight. Penguins swim using their whole body, rather like fish, steering with their wings. Whereas these fellows actually do just appear to be flying underwater.  Their wings are not as sophisticated steering devices.

Then it was off to see the seals getting fed. One thing the aquarium do is train their animals a little bit - not like circus tricks or anything tacky, just little things that will make it easier to give them inspections, to move them from pen to pen and to enrich their life a wee bit. They have two species of seals here, the fur seal and the harbour seal: 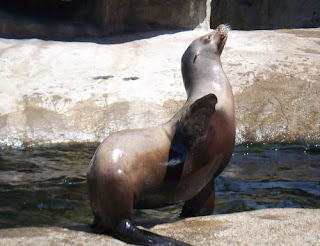 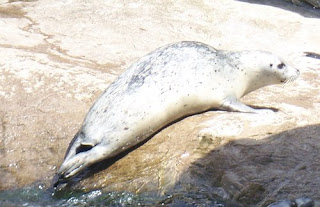 Of the two species, the fur seal are the more charasmatic. They are sea lions, which are characterised by being rather more dog-like in both appearance and behaviour - they can drag their tail up under their body and waddle along on all fours, for a start, thus are more mobile on land. They have ear flaps and larger flippers. The harbour seal is more like a mammalian slug. His hindfeet are shorter and more tail-like, meaning he cannot possibly hold himself upright, and his front flippers are smaller too. This probably makes him more streamlined in the water, but on land he has to either drag himself or roll. The difference between true seals and fur seals is somewhat like that between penguins and auks.

But the most charasmatic of all the sea otter: 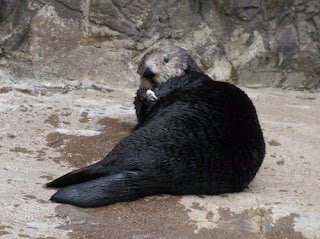 Firstly, when I saw an American river otter (in one of the two zoos, I forget which) I was impressed by how large it is. It was about twice the size of the Asiatic River otter - the only otter I had ever seen prior to this journey, and the Sea Otter is about twice the size of the river otter. Because it is the smallest aquatic mammal, I had not imagined it would be quite this big! Then again, most sea mammals are massive - they have to be because the ocean is cold and they need the insulation. Sea Otters are plump, and their fur is dense. The fellows here spent most of their time in the pond, but the keepers brought them out to be fed. They were fed fish, crabs and squid. In the wild, sea otters find a favourite rock and store it in their armpit until it is required to crack open shellfish. Here they are taught to "follow" a ball on a stick, which is how the keepers lead them to the shore and how we can get a good view of them.

Here he is in a more typical pose:

There's a bunch of indoor aquariums too - including a walk-through shark tank, shrimps, jellyfish and other delightful underwater critters. I also bought myself the most awesome t-shirt ever.  You'll see it later.

Next to the aquarium is the Aquarium Village. It is open, but so quiet that it appears closed. It is also the most Over-the-Top colourful and crazy shopping area I have ever seen. I run around with the camera, feeling rather self-conscious given that there are two guys sitting by the orca's tail, eating and smoking. There is noone else in sight, noone alive, that is. 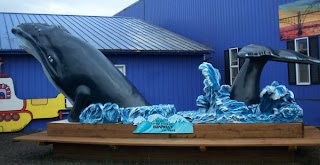 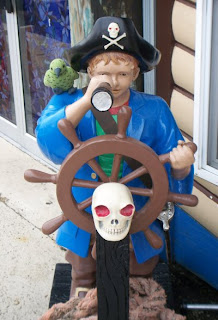 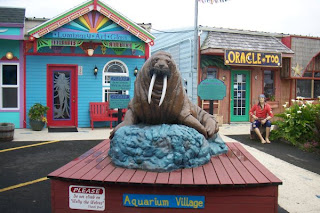 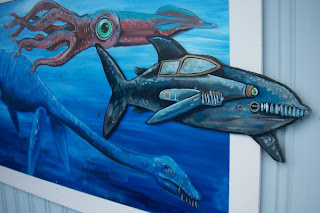 We departed Newport and headed south, towards Florence. Near the Sea Lion caves we stop at an overlook. I am busily photographing the wildflowers, the rugged beach views and am about to run off and photograph the moss on the rocks when Tim calls me over. He has found a view that is more up my alley - we gaze down upon hundreds of nesting birds. Turkey vultures glide in rocking curves, seeking any fledglings that do not survive their first flight.The binoculars and my newly acquired Alcid knowledge allow me to identify the species as murres, cormorants and gulls. There are so many of them, their nests all slightly out of beak reach of their neighbours. The weather is somewhat less clear here - a wet mist lingers in the air, and casts a haze across the ocean, making it appear even more dramatic and rugged. 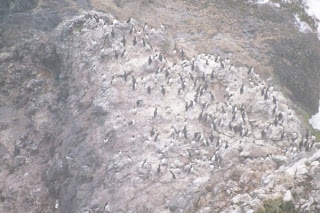 In Florence, we dine at Mo's seafood restaurant, where a small bowl of chowder comes with every meal. I love those little crackers you get to dip in your soups and chowders - I wish I could find them for sale back home. After that, we stop at Dairy Queen. Thanks to Meran, I have discovered that it is delicious. However, this will prove to be the second, and last, time that I will ever eat Dairy Queen.

Then it is to our motel. The place we are staying has the best ranking of all the Florence motels, and is situated on the south side of town, called the Ocean Breeze. Although we are forced to wait a while, as there is noone in the house adjacent to the office (she had actually ducked across to the tiny store over the road), the room is rather delightful. Two beds and nicely appointed. Tim wants to blob, so I consider wandering out and exploring the Dunes National Park - but once I cross the road I realise that I really am quite a distance from main civilisation and do not feel entirely comfortable wandering random backstreets in American alone - even if this is only Florence, Oregon, and not a big city.
Posted by LemurKat at 12:30 PM