We rose after drawn to being the drive to Moran Junction. This route is rather more scenic than Southern Wyoming with vast stretches of aspen trees and teh Teton mountains - our destination - a gorgeous vista, off in the distance. As we approached them, the "road work" signs appeared. We'd seen these a lot on the journey, and many times the delays were non-existent or small. However, this time our traffic was brought to a halt and we were told that we could expect to wait 15 minutes. So, we switched off the engine, and waited.

A car pulled up alongside the road, and out stepped a man and a woman. The woman put on a bright yellow high-viz vest - the Christchurch fashion. The man put on leather chaps, a cowboy vest and a hat. Then he sauntered over to our car, and Tim obediently rolled down the window.

"Howdy," he said. We were then handed a pile of pamphlets and a cd. The pamphlets were a map, and the cd contains a collection of songs, stories and facts about the road we are following - the Togowtee trail. Interspersed throughout the cd were Sponsorship 1 and Sponsorship 2 (and more) in which we were told about WyDoT (Wyoming Department of Transport)'s plans to fix up the beautful Togowtee trail road. I understand that this rather long stretch of road has been worked on for quite a few years.

Within less than 15 minutes, our escort vehicle pulls up, letting his train of cars head off southwards whilst turning and taking the head of our herd. Then we begin winding our way along the roadworks of the beautiful Togowtee trail. It's almost like being back home - hard-packed dirt in places, and a wee bit bumpy in others.

Upon reaching Moran Junction we turn left, following the Snake River towards the township of Moose. The mountains are breath-taking:

Tim is most amused to discover that the name "Grand Teton" is derived from the French word for breast (actually, large teat) although I have just learnt that historians argue that it is in fact related to the Teton Sioux tribe. So maybe it is just one of those happy coincidences.


There are, alas, rather a lack of public facilities along this side of the river, but we still make a detour to teh Antelope Flats where we see no antelope, but do see this guy:
At Moose we find the Visitor's Centre (and a restroom). It is still too early for lunch, so we head off through the gates (paying our $25 entry fee for Yellowstone and Grand Teton) and into the actual National Park.

We see our first (and last) real moose at the trailhead. A large cow, calmly chomping foliage in the shadow of a tree. The shadow is such that she almost vanishes in the photograph. She has quite an audience, and alledgely there is a calf hidden somewhere nearby. She seems unconcerned for its safety. I guess in these National Parks the animals have learnt that humans are not to be feared.

And then we enter into:
It is recommended that you make a lot of noise when travelling through these woods - particularly when the trees are close together or when the noise of your passage is blocked by:
We are a little apprehensive, but the surroundings are beautiful and the weather is clear and it is a glorious day to be alive and exploring in the mountains. Plus, it's not too hot, up here where the air is clear. We pass through open meadows, strewn with broken trees and coloured with wildflowers; we cross raging streams  and walk through aspen woodland.

And then we arrive at Lake Taggart.

After wandering along the lake, past groups of school kids on a day trip, we make our way up the switchbacks that lead over the hill to the other lake, lake Bradley. A fat marmot scurries across our path, stopping to bark his disdain before waddling off up the path. Swallowtail butterflies flutter around us, seeming to lead us on our way. Little copper and blue butterflies, alight on the path, and we must tread carefully. After all, crushing one butterfly could make the world change irrevocably, right? There are other butterflies too - white ones with orange tipped wings and a black one with white tipped wings (this one is called "Mourning Cloak" and is the state insect of Montana).

Strange clusters of web surround some of the plants, rather resembling spider nests. Except that these ones are filled with fuzzy black caterpillars. At first we wonder if they have become captured, but there are too many and they are too active - they seem to be weaving the web themselves. Sort of like a communal cocoon. Very strange.

We hear a noise up ahead, a staccato barking - the alarm call of some kind of bird?

And then we reach the second lake. Both lakes are crystalline clear, a perfect mirror for the mountains and the sun. The sky reflects upon their surface in a perfect, untained blue. Pine trees nestle against their shores and nothing disturbs their waters except for the occasional ripple froma  waterfowl. Above, the Teton range rises in snow-capped splendour, the melting snow forming a frigid waterfall visible only through binoculars.

After the walk, I feel rather weary, and dose a little as we drive north. We pause at a dam, where I walk through a cloud of little black insects to try and identify a pair of ducks (and I still don't know what species they were) and watch a jay berate a raven. Returning, a cowbird flutters around our car before posing for his picture.

It is now lunch time, and we dine at a cafeteria in Cother Bay. We wander the lake shore, become slightly disorientated and then head north and into Yellowstone.

Yellowstone is impressive. for one thing - it is HUGE. The drive in takes well over an hour. The first stretch winds through aspen and then snatches of the river start to appear. The combination of blue, green and red-brown, with a hint of white is just breath-taking. Large clumps of snow still remain, feeding the stream into a raging frenzy. No sign of drought here!

Yellowstone lake is equally immense, with plumes of steam rising from the shore. Ducks gather in the shallow and frigid waters - scaups, goldeneyes and my personal favourites, the bufflehead.

Near the Mud volcanoes, a cluster of cars alerts us to our first Yellowstone wildlife encounter. A herd of bison are lounging in the afternoon sun, they are so close that I almost overlook them, as I top the rise and peer off in the distance. The females lazily chew their cuds, paying little heed to the excited audience. The calves, likewise, are relaxed and unconcerned. A couple more people wander over to see what the fuss is about. "Oh, just bison," they say. I guess they've been here a while.

Then an excited cry goes out "Wolf!" as something canid is sighted on the far side of the road, jogging up a hill. I fumble for the binoculars, but it is too far away to see clearly. It does not appear to be coyote coloured, but the realist in me suggests that is what it was. This area is a popular haunt for these smaller wolf brothers. 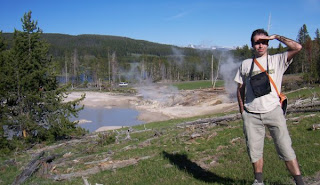 The Mud volcanoes walk reminds me rather of Rotorua with its thermal features. As we wander and peer into the various bubbling pools, fumerals and other features, I hear a siren. A common enough sound, but we're in Yellowstone, a National Park. Three emergency vehicles go speeding by, sirens blaring. Two days later, when we have internet access again, we learn that a young woman had fallen 400 feet to her death in Yellowstone's Grand Canyon. She had crossed the barrier to pose before the (admitedly spectacular) view, and the ledge crumbled beneath her feet. Very tragic.

We arrive at Canyon around 7 and pick up our keys before debating dinner. The cafeteria seems the easiest choice. There are several counters offering various types of food - pasta, pizza, roasts and salads. I choose pasta because it has the shortest line. It also has the slimmest selections, as half their dishes have gone, but that's okay, it narrows down my choice. I have vegetable bologanise on bowtie pasta. Tim's roast turkey takes a wee bit longer to acquire, but I skip through the tills, grab a table and wait for him.

After dinner we retire to our cabin. We are in one of the more "rustic" (ie: old) Pioneer cabins. It is of reasonable size and tidy, if a wee bit ricketty and without a fridge. The neighbours are rather audible through the wooden walls. The bed is comfortable enough, and there is an ensuite.Nothing flash, but it'll do for the next two nights. We're not going to be in it much, anyway!