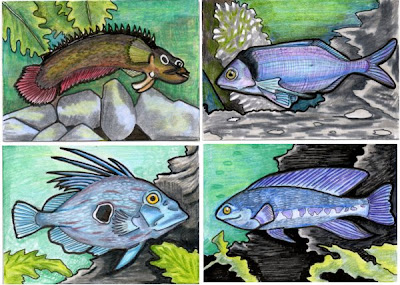 Black Rockfish:
The black rockfish is found only in New Zealand and is widespread across the ountry. He makes his home in rock pools and estuaries where he hides beneath rocks or sunken logs. with his strong fins he wedges himself in securely to strop strong currents sweeping him away. In winter the female spawns in a special nest chamber, contructed beneath a boulder. The male guards the ball of eggs until they hatch.

Tarakihi:
This deep-water fish is a common feature on many menus. He is widespread across New Zealand waters where he gathers in large schools. his main diet is invertebrates, which he collects by browsing over fine, soft mud. He positions his body at an angle, propped on his pectoral fins and grubs gently in the mud and sand.

John Dory:
John Dory are spiky, edible fish that are widespread across the coasts of Africa, South East Asia, New Zealand, Japan and Europe. He feeds largely on shrimp and small fish, which he captures by extending out his mouth - like a camera lense, to engulf it. If captured, he makes a grunting noise of disdain.

Butterfish:
This herbivorous fish begins life as a red-brown female that spends her time hiding in kelp. As she matures her colour deepens to a rich golden brown. she becomes more active and social. In her 5th or 6th year it is possible for her to change gender, becoming male. With this maturity his colour deepens into a blue-black. He is restricted to New Zealand.

Alert Pigfish
Probably the New Zealand fish that always appealed the most to me. Although there are others with the same name, this fellow is the only one in his genus, Alertichthys. He is found at depths of 100-600m. Using his long snout he roots about in crevices for invertebrates like worms and crabs.

Longfin Eel
This handsome devil is getting rarer. He is among the largest eel species in the world, growing up to 2 metres long. He grows slowly and can live to be 60 years old. Shortly before dying (usually around the age of 24) he joins up with his fellows and swims 5000 km up into the tropical Pacific to spawn. The females lay the eggs - up to a million, and the males fertilise them. Then they die. The youngsters hatch as tiny, transparent elvers and make the long journey back inland to feed, grow and eventually breed.
Posted by LemurKat at 10:17 PM