As many of you know, Pokemon Black and White has recently been released (or is due to be released), along with a whole bunch of new Pokemon. And as you know, I am moderately interested in Pokemon. So when the "15th Anniversary Pokemon ATC swap" began, I had to join in. Except that I was too late, and am currently at second place on the Waiting List. No worries, I made the Pokemon anyway (if I can't send them to this one, they'lre going to become my "Whimsical birds" for another swap).

Here's four of the new fellows: 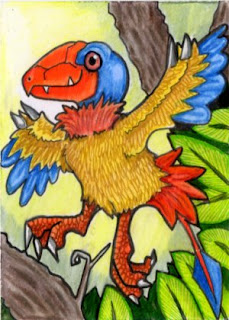 #566. Archen
An ancestral bird Pokemon, Archen is un able to fly. Instead he gets about by making a series of large hops, aided by his wings. He is arboreal and leaps through the branches as agile as a Mankey, in pursuit of smaller prey. 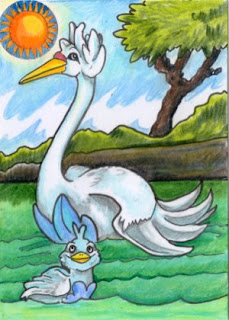 #581. Swanna
A powerful bird Pokemon, Swanna is also very beautiful. She is fiercely protective of her Duckletts and will defend them with sharp stabs of her bill or a whip from her long neck. She lives in flocks, and at dusk, she and her fellows dance around their leader. 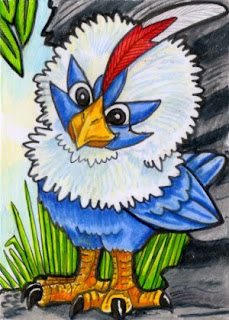 #627: Rufflet
This courageous little Pokemon will face up to any enemy, no matter how strong. All Rufflets are male, their female counterpart is Vullaby. They use their talons to crush berries and are also very strong and capable fliers. 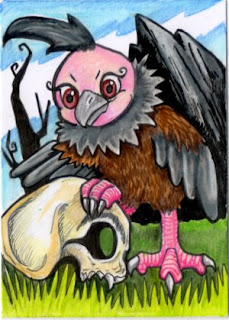 #629: Vullaby
Vullaby are always female.Her wings are weak and she cannot fly, so she protects her vulnerable regions with bones.Carnivorous by nature, Vullaby are predominantly scavengers, but will pursue weakling prey when she can find it.
Posted by LemurKat at 10:16 PM