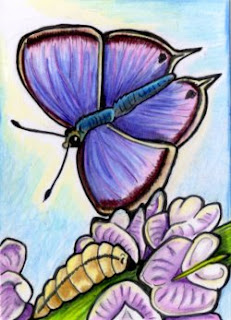 Long-tailed Blue Butterfly on South Island Broom
There are several species of blue butterfly in New Zealand, and it is one of our most common, although rarely noticed next to the more fanciful Monarch and the pest species, the White Butterfly. This particular species is known as the "long-tailed" and was first noted in New Zealand in 1956. It is thought that it has self-introduced from Australia. A cosmopolitan species, it is also found in Europe, Hawaii, Africa and Asia along with the Pacific Islands. 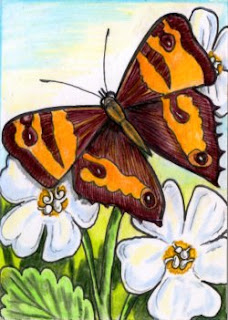 Forest Ringlet with Native Foxglove
This attractive butterfly is also one of our most vulnerable to extinction. Its population has been in steady decline - probably due to wasp predation. The life cycle takes one year, although recent research shows that two year cycles may occur in highland areas. 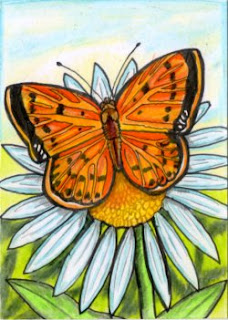 Copper Butterfly with Alpine Daisy
This diminutive and pretty little butterfly is widespread across the country, and includes at least 40 different spcies, all that look similar and are referred to under the same name. They occupy a number of niches - including the alpine reaches. Related species also occur in the cloud forests of New Guinea and in the Northern hemisphere. Copper larvae are particular feeders, and only eat plants of the dock family. 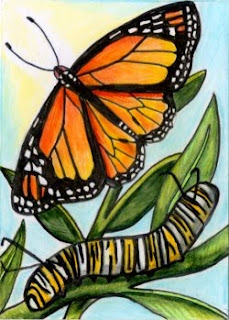 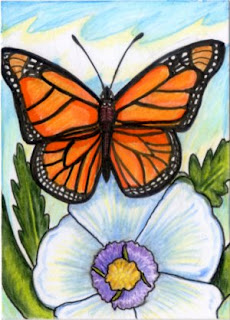 Monarch Butterfly
Probably the most familiar of the New Zealand butterflies, the Monarch is large and prevalent in urban areas. It can be encouraged to the garden by planting milkweed (the "swan plant") which is the favoured food of the caterpillar. The male - on the left - has a black spot on his wings.
Posted by LemurKat at 7:35 AM