New Zealand has a vast number of gecko and skink species - indeed, more are still being discovered. Thus choosing which ones to illustrate proved to be a bit of a challenge. They all look much the same in terms of shape and in many cases, colour, so I have selected some of the more common or widespread species. Many of the species also have different colour morphs, so whilst they are related genetically, the ones in Canterbury might look different from their North Island counterparts.

Our lizards are special in that they do not lay eggs - all but one of our gecko and skink species are viviparious. Because our conditions are colder than those of their tropical counterparts, retaining the eggs inside the body while they develop means that the female can move to a warmer position if the need requires. The one exception is the appropriately (if rather boringly) named Egg-laying skink (which is also semi-aquatic) which I have drawn on a previous occasion.

Geckos have large eyes and prehensile tails and live an aboreal existence. They have long, fleshy tongues and frequently lick their eyes as they are unable to close them. NZ has both nocturnal and diurnal species, but traditionally geckos are nocturnal. We have over 40 different species.

Skinks are sleek and lean, they move fast and are usually to be found on the ground, particularly amongst rotting wood or loose stones. They are active during the day. We have more than 50 different species. 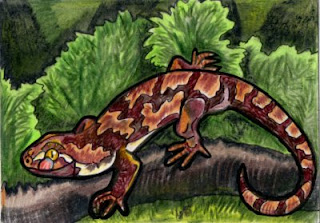 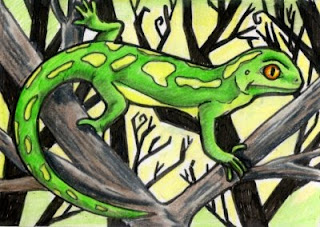 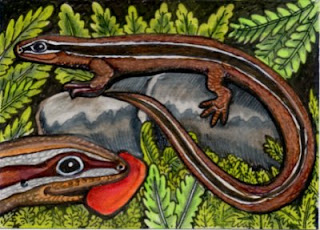 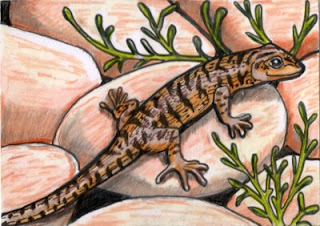 As you can see, I find lizards more of a challenge to draw than birds or mammals, so there will likely be more of these before I complete my collection.
Posted by LemurKat at 12:14 AM