New Zealand is famous for its natural oddities - particularly in the form of large, flightless birds. This is not something that NZ is unique in - many islands once featured birds that had lost the use of their wings. Why might this happen? Because on those islands - New Zealand, Madagascar, Mauritius, Rodrigues, New Caledonia - there are few mammals, and birds evolved to fill the niches they had left. Once they no longer fly, they can grow particularly large and heavy, as is displayed in the form of this hen: 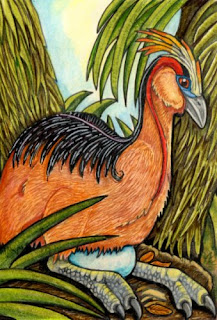 She is a Crested Moa. NZ once held a number of moa species (about 11), ranging in size from a few feet (1.3 m) to several metres (3.7 m) in height, and the Crested Moa was one of the more middle-of-the-range ones. It would have weighed around 75 kg. Her habitat was cold, alpine and montane (cloud) forest. She was quite widely spread across the South Island. The presence of a crest was determined by examination of her skull, which had a large number of pits in it. Others of her relatives have been found to feature these as well, but not as many.

Moas filled the niche of large herbviores - like deer or giraffes. They grazed trees, stripping them of leaves and bark, flowers and probably berries. Theie beaks acted like a pair os secateurs, snapping off the twigs which were then ground down in their gizzard. Large and heavy birds, you might think the moas would have nothing to fair. 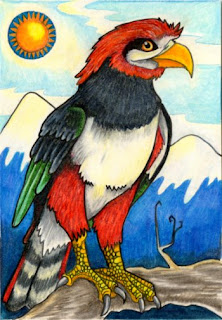 Because sharing their forest home was the largest raptor ever known, the Haast's Eagle. Weighing in at 10-15 kg (9-12 for males), she could measure up 1.4 m from crown to tail tip, standing about 90 cm tall. Her wings were relatively short for her size, with a wingspan of 2.6-3 m. This is a trait found in many forest dwelling raptors, as it allows them greater manouverability amonst the trees. She compensated for the loss of lift by having a long, broad tail.

The main food source of this raptor was moas - which could be up to fifteen times her weight. She would swoop on them from above at speeds of up to 80 km/hr and seize its pelvis in her one mighty claw whilst striking it about the head or neck with the other talon and stabbing it with her beak. Her weight and the speed and force at which she attacked was equivalent to dropping a cinder block on it from eight storeys up. It would still not have been a quick death.

When the moa became extinct in the 1400s, thanks to heavy hunting from the Maori; the eagle quickly followed suit. 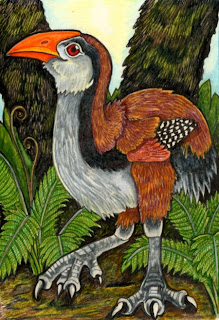 Another bird that died out around that era was the Adzebill. This flightless bird has proved a puzzle to scientists who have at times considered it related to the rails, or possibly to the kagu of New Caledonia. It was a large, heavy bird standing around 80cm tall, and at first they were considered to be a small species of moa. Unlike the moas, however, Adzebill have wings - of a sort. Their carpometacarpus being greatly reduced (it's a wing bone), their wings were smaller proportionally than that of the dodo. Their other unique feature was their oversized beak. This powerful, sharp-edged tool looks to have been ideal for crunching through logs or digging in the dirt, but the adzebill's diet is unknown. It is speculated that it had an omnivorous diet, but may have used its bill and feet to dig seabirds and tuatara from their burrows. It probably fell prey to the kuri (maori dog, also extinct in NZ) as well as being heavily hunted by the Maori.
Posted by LemurKat at 10:11 AM