More birds in the hand... 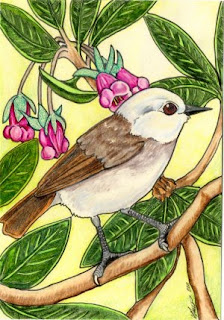 Pōpokotea the Whitehead (on Karo)
The North Island equivalent to the Yellowhead, the Whitehead is still moderately well established on the mainland. A highly social bird, they gather in family groups and are more frequently heard than seen as they flutter through the upper canopy chattering to each other. They favour large tracts of forest, both native and pine, which hold plently of their favourite food - caterpillars, spiders, beetles and moths. Occasionally they will tag along with kakariki, saddlebacks and silvereyes. Their nests are compact and delicate and they form polygamous partnerships, with several hens to one male. 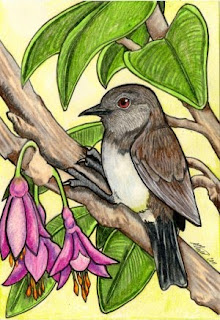 Riroriro, the Grey Warbler (on Tree Fuchsia)
Riroriro is very nearly our smallest bird. He loses out to the Rifleman merely because his tail is slightly longer. An inconspicious chap, he is not often seen but frequently heard with his long, tuneful warble emitted as he flicks through the trees. He is an insectivore an dusually hunts alone. In breeding season, he constructs an elaborate hanging nest in which his female lays 5-6 eggs. Youngsters grow fast, and she can fit in several broods a year. This is good, because after the first brood, the cuckoos arrive back in town. And she is the favourite host for the shining cuckoo. Despite the fact that the cuckoo eggs are bigger than her own, and that the chicks are huge, little Riroriro does not seem to notice the difference. Possibly she is also proud that her chick would grow so big and strong. Or perhaps I'm just anthropomorphising too much. 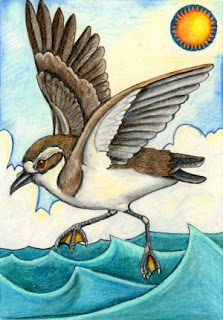 Takahikare-moana the White-faced Storm Petrel
These are the smallest and most delicate of our native petrels. They are frequently seem around New Zealand coasts where they frisk in loose flocks across the waves, as though walking on water. In this manner they hunt for plankton and small crustaceans. Almost entirely pelagic, she comes ashore only to breed, the nest being built in a tiny burrow or a rock crevice. These tunnels form a honeycomb of burrows that appear very fragile. At night the flock drifts in and she will drop down by her own burrow and scuttle inside. She lays only one egg and both parents regurgitate a fish paste for the hungry chick. After breeding, many of them flock to the tropical waters of the Pacific or South America.