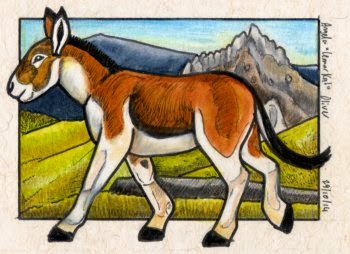 The Kiang is the largest wild ass. She resides in the montane and alpine grasslands of the Tibetan Plateau. Herds can number up to several hundred individuals, but are not permanent groupings and are generally gatherings of young males, females and their foals. Older males lead a solitary existence, defending a territory. During breeding season he rounds up the females in his territory. Kiang are hunted by humans, and also by wolves. Members of the herd will form a defensive circle and kick and bite at any approaching canine predators. As such, wolves generally target lone animals.