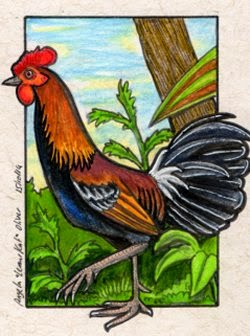 There are four species of Junglefowl, characterised by the male's wattles, his bright feathery cape and arching tail feathers. The females are considerably duller in colouration and smaller in size, which helps them remain camouflaged while incubating their eggs. The Red Junglefowl, is considered the ancestor of the domestic chicken. Wild species are found through the southern reaches of Asia, with feral populations occuring in Hawaii. Outside of breeding season, mixed-gender flocks are formed with a distinct pecking order. As spring approaches, the stronger males split off, maintaining territory with a harem of 3-5 hens. Fights between rival roosters are vicious, using the sharp spurs on their lower legs to wound his opponent.
Posted by LemurKat at 8:35 AM