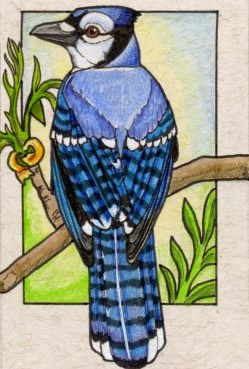 The Jay are colourful members of the Corvid Family, closely linked with magpies.  Three different systemic classifications are recognised: the Old World, the grey and the American. This fellow, a Blue Jay, falls into the American category. His main diet consists of seeds and nuts - which he cracks open with his strong bill - and the occasional invertebrate. He has been known to hide nuts for later consumption. Jays are in general aggressive, inquisitive and noisy. Youngsters will play with shiny of colourful items, such as bottle caps, carrying them around until they grow bored.
Posted by LemurKat at 7:36 AM