My Muse - the story behind "LemurKat" 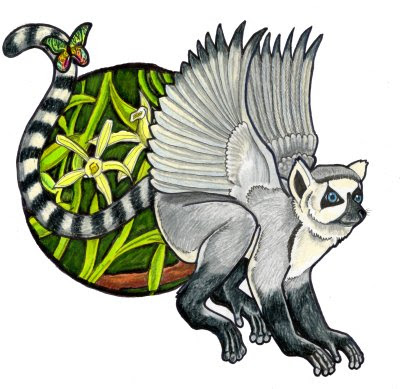 Once upon a time, a long time ago, I was not LemurKat. My online moniker was "Raynflower", named after a character I had played in a long-running role-playing game. She was a dark faerie, and she was pretty nifty. But... let's not get into her.

I first created Kataryna Lemusu when I fell into the Furry fandom circles. I needed a fursona - so what better than to use a ringtailed lemur? An animal that I enjoyed watching at the local zoo, where I did weekly volunteer work. Her name - Kataryna - was derived from the ringtailed lemur's latin name - Lemur catta which I eventually blurred into one word, to become "LemurKat". I have now held the moniker for around 10 years, and when you search it on google, what you will find is mostly me (except any really embarrassing stuff - obviously that's someone else).

At some point, Kataryna committed suicide. I was going through a down period in my life - don't ask me what it was - I can't remember, and I drew a particularly savage picture of her with slashed wrists.

But, thanks to Anubis, guardian of the Afterlife, Kataryna rose again, as an angel. Her fur turned silver and she sprouted wings. But with her new form, came a great responsibility - she had to save the world.

So began the Furritasia Chronicles. And never finished...

After I grew out of the Furry-biz, I still clung to Kataryna. She lost her humanistic characteristics, and took up a role instead as my muse. She has starred frequently in my art - with wings, without wings, sometimes with golden eyes, sometimes with blue. Sometimes dressed in costumes from various times and cultures. Masquerading as Frida or the Mona Lisa, or transformed into a My Little Pony. She graces the backs of many of my trading cards.

And she also had a starring role in "Lemurs: A Saga", without her wings, playing the part of Fiantrana, Aurelia's foster mother.

This is my latest rendition of her - designed to become a t-shirt print. Featuring a Malagasy Sunset Moth and Vanilla Orchids - look for her at AFA 2012 in Portland.

Here is a collage of Katarynas, in a multitude of incarnations: 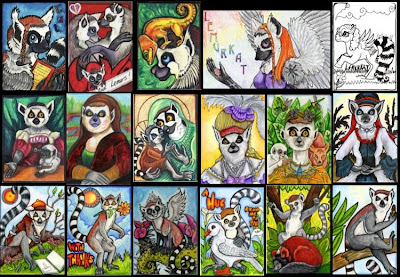 I enjoyed learning the history of Lemurkat, thanks for sharing.