I decided a month ago that it was high time I hosted another "Original Species" swap, and thus I began one. There was just one problem. Unlike my previous OS swaps, I was not working on a fantasy noel with original critters in it, and thus I did not have any previously designed critters that I felt like drawing.

Never mind, I decided to undertake plan B, which was to choose a current, extant animal species and develop mutations and adaptations to it so that it could fit into a different habitat or different habits. I just had one hard and fast rule with this - the creature had to be biologically realistic - so no lemurs with bird wings, for example.

I decided on rabbits. Because... well, who doesn't love bunnies? 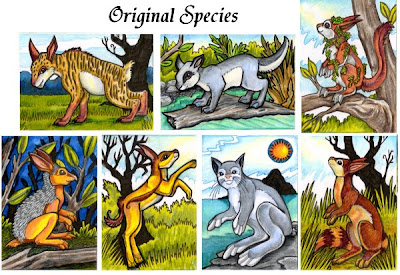 Predator Bunny
This vicious lapine has muscular shoulders and powerful jaws, making him capable of bring down large and heavy prey. His fur is patterned in an array of stripes and spots, allowing him camouflage against his savannah habitat.

River Bunny
Sleek and long, this water lapine has short legs with powerful webbed feet. His ears are greatly reduced in size, creating less resistance when he skims through the water. His tail has developed long and flat to provide a paddle. His eyes are positioned high on his head, allowing him to emerge only a short distance to see over the water.

Arboreal Bunny
This fuzzy little critter has longer and more flexible fingers than his terrestrial counterparts. His tail is also longer and fuzzier, providing him with balance as he scrambles through the tree tops. Probably his most interesting adaptation is the symbiotic relationship he has formed with a type of mistletoe. The sees of this plant bury themselves in his fur, and grow, providing him with camouflage.

Insectivore Bunny
Note the prehensile nose on this wee fellow. He uses it to sniff for ants and other insects, which he then unearths with his strong front paws. His fur has developed into spines, which protect him from Hunter Bunny below.

Browser Bunny
His toes have fused into something that is almost a hoof, making him even faster across the ground than his ancestors. His colouring provides him with some camouflage, breaking up his body so that it is harder for the Predator Bunny above to track him down and make him dinner. He also prefers to browse leaves, rather than graze.

Sea Bunny
This lapine has increased his body mass, the extra fat providing insulation against the chill bite of the water. His whiskers are highly developed, allowing him to navigate through deep water. His toes have fused together, forming efficient paddles when combined with his powerful hindlegs. As in the River Bunny above, his ears are greatly reduced in size to decrease resistance. He grazes on kelp and often lies on his back, exposing his pale belly to the sky.

Hunter Bunny
This fellow actually looks a bit like Furret, a Pokemon. He is long and sleek. His tail has developed into a fine plume which helps him balance as he pursues Arboreal Bunnies along tree branches. Although he also hunts Insectivore Bunnies in the long grass and his long, low form makes him an efficient hunter of ancestral bunnies as well. He is a generalist omnivore, and will eat fruit or even grass, but his preferred diet is meat.

I still have another five to develop for the swap, so if anyone has any suggestions on habitats or behaviour types I might like to experiment with, let me know. Other ones I am considering are an armour-plated bunny and an urban/city bunny. Maybe I should create one that predates specifically on birds. Hrm, so much potential here...

Also, if anyone can help me come up with decent names, I'd be very grateful!
Posted by LemurKat at 10:29 PM