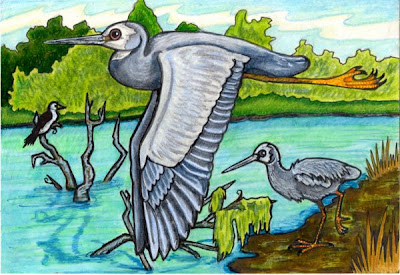 Matuka-moana, the White Faced Heron
Another Australian that now calls New Zealand home, the White-faced heron started to breed in this country in the 1940s. Now they are the most common heron species and are frequently sited in estuaries, swamps, around lakes and rivers and - essentially - anything wet. Their main diet is aquatic creatures - small fish, crabs and invertebrates, as well as the occasional reptile, frog or insect. Several techniques are employed while hunting - the stand and watch and wait method, stalking slowly about and keeping their eyes open, flicking their wings or raking with their feet to disturb anything buried in the mud. Or, if all else fails, charging at it with wings open. Dring breeding season these birds become highly territorial, choosing a mate, defining their territory and laying 3-5 eggs in a shallow , untidy bowl-shaped nest. Outside of breeding season they sometimes socialise with others of their species. , particularly if there is a lot of wetland to go around - such as after rain or flooding.
Posted by LemurKat at 10:31 PM