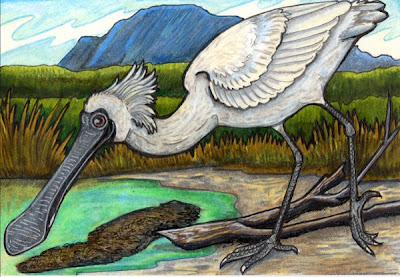 Kotuku Ngutupapa, the Royal Spoonbill
Like many of our avian species, the Royal Spoonbill made the journey across from Australia and decided that life was better here. Spoonbills were first recorded in New Zealand in the 1930s, but it was only from 1950 that they truly became an established species. It's long, spoon-shaped bill might look quite ridiculous, but it is a most elaborate tool. When feeding, the Spoonbill stands knee-deep in the water, swirling its bill about to create a mini-eddy or tidal pool that will draw and any small creatures, such as crustaceans, fish and frogs, from the water and mud. Papillae (touch receptors) inside the bill detect the prey and these birds are able to forage at night as well. Spoonbills travel in flocks, a feature which can be used to distinguish them from the rather more regal Kotuku or white heron. They fly in a V formation. Many breed at Okarito, along with their slender billed cousins, but other breeding sites have been established along the coast. Nests are constructed high in Kahikatea trees, or atop smaller, scrubbier bushes - or even the ground. The higher the nest, the more risk they have of losing chicks or eggs during stormy, windy weather.

The Maori name - Kotuku Ngutupapa, translates as "board billed kotuku."
Posted by LemurKat at 10:01 PM