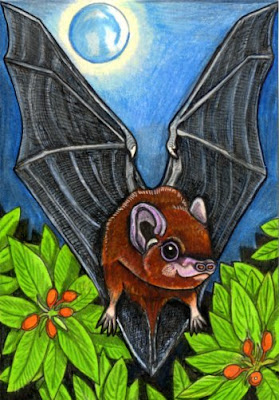 The Other Pekapeka, the Long-tailed Bat
Early Europeans were not known for their imaginative animal names, and thus this slightly-more-common species of bat is known as either the "long-tailed" or the "short eared" bat. Then again, the Maori called both species "pekapeka". This wee fellow is still found on the Mainland - where you can actually see them in Talbot forest, near Geraldine. Although they are becoming increasingly rarer. At night as they flutter from tree to tree, they are often mistaken for large moths or - as the title suggests - nocturnal fantails. They are able to reach speeds of 60 km/hour. Smaller than the short-tailed bat, they weigh a mere 8-11 grams. Their high frequency sonar calls contain a few lower frequency notes - audible to the human ear (unless you've listened to your IPod too much and lost the higher register). They feast on winged insects, scooping them up in the membrane that runs the full length of their tails. Only one pup is born per year which contributes to their increasing scarcity. Roosting tends to be communual and they leave their hollow at dusk to hunt the forests for food. The long-tailed bat is related to several species of wattled bats in Australia, and this is probably from where their ancestors originated.

Now I want to go back to Peel Forest and go bat hunting!
Posted by LemurKat at 9:41 PM