This colouring page was created for a charity designed to discourage people from buying and breeding birds to keep as pets. Now, I must confess, I once kept birds as pets. I was obsessed with them (still are, of course) and I really wanted some birds of my own. So, we got Corky, a turquosine parakeet. Now, these pretty Australian grass parakeets are NOT cage birds. And Corky did not like being incarcerated in a small cage. So, young as I was, I convinced my parents that we needed an aviary. Corky liked the aviary much better, and we got him a mate (called Katie, if I recall correctly) but they never did breed. Anyhow, from there somehow the aviaries expanded to three and we began breeding canaries and budgies, zebra finches etc with some success (particularly the budgies, the canaries had the annoying habit of forgetting to feed their babies after 4 days and letting them die). As I grew up, I did not so much have an epiphany and decide that breeding birds is wrong, but I no longer had the time and energy to spend on caring for them and the birds were sold, the aviary dismantled and a wooden seating area assembled in its place. This was probably for the best.

Whilst I am still not against well kept, well maintained aviaries in which there are a reasonable number of birds (not too overcrowded and not too many species), I am far less enthused about keeping birds in cages. Birds are an animal designed to fly - putting them in a cage is essentially the same as keeping a person in one room for their entire life. Especially parrots. Your average canary or finch - their thoughts might go along the lines of "food, water, mate" and "my territory, my territory" but parrots are SMART. Keas are able to solve problems - which is better than many mammals (including some primates). They need constant stimuli and attention - much like a toddler. But some species can live for 80 years. So before you buy a macaw or cockatoo, you should think "do I want a toddler for the rest of my life?" Shutting it in a cage and cleaning its water and seed regularly is going to make your bird bored and depressed.

The problem in America (and probably other countries) is that people don't realise the responsibility of owning any pet - but probably many assume that a bird - because it is self contained in its cage, so to speak, is less difficult than say a cat or dog which will need to be walked. They're wrong. Parrots in particular can be noisy, destructive and demanding. Like I said, a toddler. If they get bored or stressed they might start plucking out their feathers or self-harming in other ways. So they buy this parrot, then find that it is too demanding, or won't learn to talk or annoys the neighbours by swearing loudly all day and night. So... they hand it over to a shelter or some such. And then buy a new one in the hope that it will be better.

This program suggests that if you absolutely MUST own a bird, that you adopt an abandoned one. Because like cats and dogs, there are a number of abandoned birds in need of a kind, caring home.

And if you do have a bird, then cherish it. It may not love you unconditionally, it may bite the hand that feeds, but it will be your companion for the rest of its life. Which could be as long as yours. Or longer. So make sure you leave it to someone responsible in your will.

And despite the fact that birds do not belong in cages: Do NOT let your birds go. They will probably die. Either that or they will breed and introducing new animals to the ecosystem is a recipe for disaster and at the very least, irresponsible. If you cannot find a new owner or a shelter that will take it in - then you will have to have your bird euthanised.

If you buy exotic species, you may be encouraging poaching and exploitation. Because of poaching - the only bali mynahs and the only spix macaws are now found in captivity. Poaching has lead to their effective extinction (along with deforestation and hunting, I imagine).
This is a Macaw. It's techncially a scarlet macaw, but you can colour it any way you like. If you click the image below, you will get a bigger image which can then be printed off: 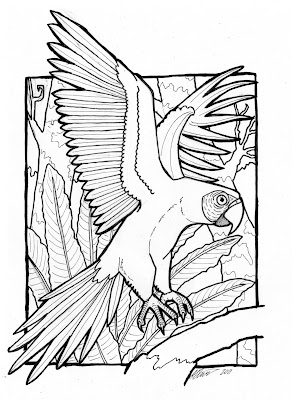 And if you're curious, here's some more information on why keeping birds is being discouraged:
http://www.idausa.org/campaigns/exotic_birds/index.html

And some videos:
http://www.youtube.com/watch?v=6FY9SuP6dAc&feature=player_embedded
(love the quote "...they'e like a three year old running around with a canopener on their face...")
Posted by LemurKat at 9:48 AM 2 comments:

I love cartoons - I'm a big kid at heart. Anyhow, I could not resist participating in a Cartoon orientated ATC swap. And then I learnt something - drawing cartoon characters is HARD. Seriously. For at least two of these pictures I had to pretty much use a "how to draw *character*" in order to get the proportions accurate. Of course, then I decided that I was going to colour them up my way and take on a semi-realistic look by not inking the outlines.

Now, can you name these cartoons? 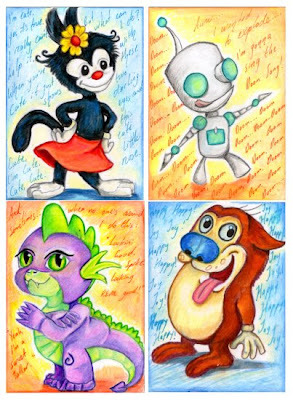 Right, well I've slowly worked my way back into the artsy stuff. Mainly by finishing up two drawings that have been sitting on my desk for far too long.

The first is a Capricorn Goatfish, with colouring based on the Goatfish (taken from a handdraw reference sheet of Hawaiian snorkelling, so colours were exaggerated). 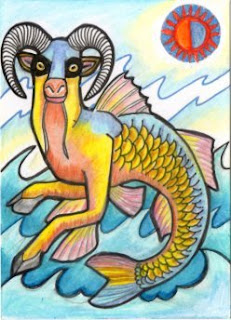 The second is the last of my mutated birds. It's a sorta dinosaur/bird. 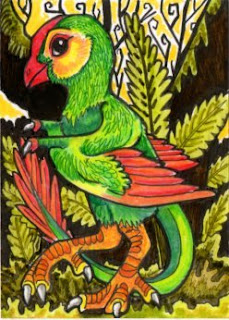 Posted by LemurKat at 9:56 PM No comments:

I'm sorry about the lack of art recently. I think I've lost my artistic mojo. I just cannot motivate myself to write or draw. It's not that I am depressed - life is pretty good in many ways - I've started working at a new place (same company, new store), I've just travelled down south to meet one of the rarest birds in the world, Sirocco the kakapo... I've got a husband whom I love very much indeed and I've sold a few copies of my book (not many, but at least people aside from me are reading it). But... it's just like something is missing...

So, dear readers, if you have any advice on what I can do to reclaim my artistic drive, please leave them here. Words of encouragement also welcomed. I shall leave you for now with a picture of a pukeko, which - aside from my tutorial illustrations (see my previous post) - is the only piece I have completed so far this month: 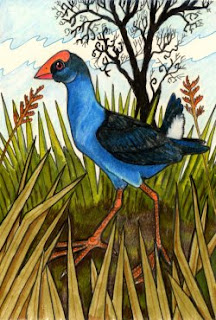 I am also contemplating a story about a penguin.

I am working on a new series of tutorials focusing on how to draw our feathered friends. Here is the first one, "from photograph to lineart" which shows how I use photographs as a reference for my artwork. It also looks into differences in the shape and structure of birds.

The next tutorial "Birds in Action" will deal with more dynamic poses, and will of course include "Birds in Flight" and whatever else I can think of.

The third tutorial will focus on colouring.

Click the link to open the tutorial which is a 5.93 mb pdf file.
Posted by LemurKat at 11:45 PM No comments:

Not that I've been anywhere - I just realised it's been two weeks since I posted to my so-called "daily" art blog. Oh noes! Looks like someone's been getting slack with the arts...

Well, I am, but I've also been working on a tutorial on "how to draw birds" which turns out to be rather more epic than I had originally envisaged.

Anyhow, I've also been drawing some bird-chimeras for Shewolf's "Mutated Birds" swap. So I might as well share them here. There's another in the works, but I appear to be too easily distracted at the moment.

I have only drawn one image this month. Isn't that terrible? These were all done at the end of August. 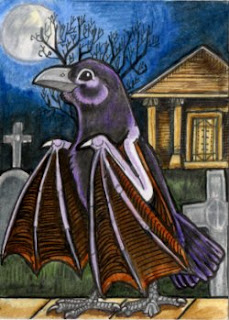 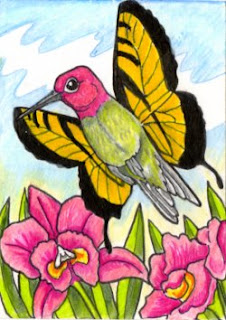 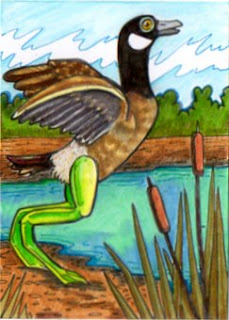 The top two are inspired by "Daughter of Smoke and Bone" and the bottom by my pet Duck-frog in the online text-based MUD game "The Forest's Edge." Which I played over 10 years ago...
Posted by LemurKat at 10:20 PM No comments: