Pateke, one of the world's rarest ducks 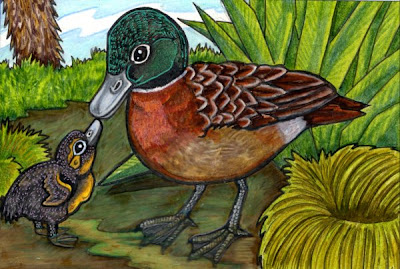 This little brown dabbling duck is a scarce fellow indeed. Once found throughout New Zealand, now he is limited to tiny pockets in Northland and Great Barrier Island. Less than 1000 of these charming ducks remaining in the wild, rendering it critically endangered. These little ducks are almost nocturnal in behaviour, spending the days hiding under foliage and coming out in the evenings to forage. It is speculated that this behaviour can be attributed to hiding from avian predators in the historic past. Despite being of the "Dabbling duck" persuasion, their diet consists predominently of worms, insects and crustaceans and they sift through muddy puddles in search of food. Outside of breeding season, they gather in large flocks, but pair off to raise their offspring. Dad takes an active role in the tutoring of his offspring, and also fiercely defends his pond from any other waterfowl - they are quite fierce and determined in ridding their territory of competition - killing other pateke and small waterfowl and even attempting to take on larger birds like swans and paradise shelducks. If the pond is over 0.2 hectares in size, they may tolerate other species -as long as they don't come too close!

This picture depicts dad in his breeding plumage. So don't get too close!

A huge conservation project has been put into effect to save these guys - you can learn more about it at brownteal.com
Posted by LemurKat at 9:56 PM