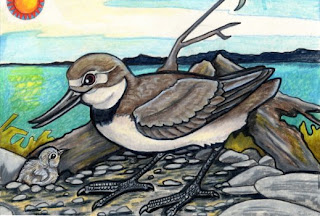 Ngutuparore, the Wrybill
This wading bird is truly unique - for it is the only bird in the world with a bill turning to one side. It is a species of plover, and its bill is turned slightly to the right. Why? Well, theories on this differ - it could be a mere evolutionary quirk, or it could be an aid to its foraging. The Wrybill hunts for caddisfly and mayfly larvae, which hide beneath rocks. With its bill it is perhaps more adept at locating and extracting these. Wrybill are migratory within New Zealand, but have never been reported outside the country - not even as a windswept vagrant. They breed exclusively in the braided rivers of the South Island, but outside of breeding season can be found across the north and south islands. A favourite vacation spot is the Firth of Thames, which can hold up to 75% of the entire population in the colder seasons. These means that an environmental thread in this location could, literally, decimate the population. Whilst not considered uncommon, wrybill numbers have been undergoing a slow but steady decline.
Posted by LemurKat at 7:23 PM