A little bird that really rocks 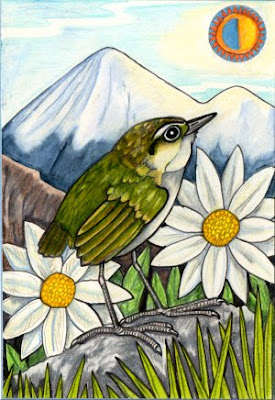 Pīwauwau the Rock Wren
This charming and active little bird makes its way bobbing and flicking its wings in an endless quest for insects to munch on. Once relatively common, it is now in steady decline - a fate already faced by most of its close cousins - all but the rifleman are now extinct. Although named "wren", these tiny birds are not related to the wrens of Europe, America or Australia, but in fact belongs in its own family. Although capable of flight (unlike their extinct cousin, the Lyall's wren), they usually hop, and thus are prone to predation. Their home is the rocky mountain outcrops of the South Island, where they are limited to separated pockets. Their complex nests are built in rock crevices - first they excavate the soil, and then create a complicated sculpture of dried grass, moss, skeleton leaves, tussock and lined with feathers. The nest is fully enclosed except for a small side entrance. Both birds take turns incubating.

You can vote for the Rock Wren in the Forest and Bird "bird of the year" poll here: http://www.forestandbird.org.nz/poll
Posted by LemurKat at 9:12 PM