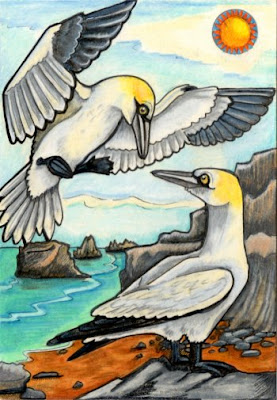 Australasian Gannet
Whilst breeding colonies on offshore islands formed earlier, this white seabird was first recorded breeding on the mainland around the late 1800s. Since then it has well and truly colonised the country with Cape Kidnappers, Muriwai and Farewell Spit, being the most readily accesible. The colony at Kidnappers is one of the most famous. By the late 1990s, over 6500 gannets were reported to be breeding there. Now the beach is covered in their feathers and the air rings with their calls. Hens lay only one egg, and both parents take turns incubating it. The nest is made from dried seaweed, cemented with guano. The chick hatches blind and helpless but grows swiftly and at 14 weeks is bigger than its parents and ready for the next stage in the adventure of its life. After exercising its wing muscles and learning to fly with skill and ability, the now four-month old youngsters depart on-mass, making the long flight - unassisted, to the east coast of Australia. Here they remain for about 2-3 years, foraging and surviving, before making the return journey. Only about a quarter return safely to the waters of New Zealand, and from here-on they remain here, diving for fish and eventually finding their own mates. It may take them a couple of years to succesfully pair off and find a space of land to call their own, but once mated, gannets remain life-long companions and can live for up to 30 years.
Posted by LemurKat at 7:37 PM