Sending a heart to Bolivia

As you may have noticed, I have now set my sights on "conquering" South America with art. Whilst researching Postcrossing users in countries I had yet to post to, I discovered Thirtitude in Bolivia. What Thirtitude is doing is really sweet - he's organising for people to send postcards from around the world to his girlfriend, all of which should feature a particular stylised heart. So I dropped him a quick line to see if he was keen, and he took me up on my offer, so here is a LemurKat illustration featuring their symbol: 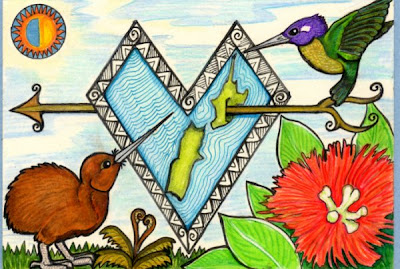 The bird on the top right is a Bolivian Hummingbird species, and is there to represent the lass and the cards eventual destination. The other bird is, of course, a kiwi and the flower a pohutukawa.

I apologise for stabbing Taupo. It was an unfortunate coincidence that the arrow was located before I placed the islands.

The only problem is, this is to be sent "naked" and I either need to laminate it or send it in a plastic sleeve. But I'm not sure the plastic will be accepted, since it means the stamp won't be franked directly. Then again, it's not as though someone in Bolivia can do something with an NZ postage stamp.

Also as my husband said "someone might steal it because it's pretty" but I suppose I face that problem everytime I set one on its journey...
Posted by LemurKat at 9:33 PM