Karearea perched atop a stump... 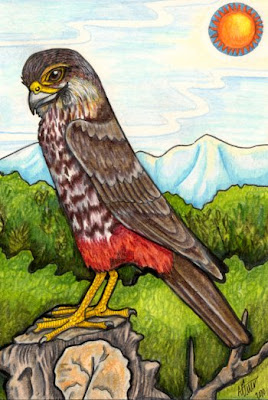 This magnificant bird is our only extant endemic raptor and a beautiful example of bush falcon. If you have been regularly following this blog, you will know that this is the second 6x4 image I have rendered of her - and that is because I did not feel the first did her justice.

A skilled predator, the Karearea hunts for birds and she is dept at snatching them from the air or swooping down on them. She has become the Vineyards' friend, as she is encouraged to make their home her home, as long as she pays her dues by devouring any small birds that might damage the grapes. Common prey are finches, silvereyes, sparrows and anything small andf feathery - along with moths and maybe the occasional mammal or lizard. Several pairs were captured from the hills and relocated in wineries and have now begun breeding there. Unfortunately, some of these birds have electrocuted themselves on electricity distribution transformers.

I've lived in New Zealand my entire life - 33 years, and saw my first wild falcon this year at Okarito. My parents and I were calmly walking along, chattting about the kayak adventure I had just been on, when suddenly a shape descends in a dive before us, sending a small flock of finches scattering. Alas, her attack was futile, and she swiftly soared up to perch in a tree where I got some excellent shots of the back of her head (although my father captured her in profile). Those photos, and some landscape ones taken from Okarito, were used as references for this piece.
Posted by LemurKat at 12:21 PM