A friend of mine is having a baby soon, and as she already has a toddler, I thought it would be fun to give them something to put on their wall. Now, I had these coasters lying around that I had acquired years ago and never got around to using (and was thus a little guilty about). But the problem was, that I would have to paint them. And I can't paint. Can't paint, you say? Surely she jests! No, sadly, it is true. Not with acrylics anyway. I achieve a paint-like effect at times, but it is always with pencils and markers, rarely paintbrushes. And the times I do use proper watercolour paints I've generally gone through later and added in detail with pencils. However, I pulled them out and discovered that lo and behold - ordinary pencils will work on them, to a point (the derwent were the best) as do tombow markers (although they prefer a layer of pencil under them). So, I coloured them in and sketched up some safari animals, which I then glued on. But something seemed a little wrong - there was dead space in some of the pieces. I can't abide empty corners, as you've likely noticed, and thus was forced to add... flowers! The lion was the only one to avoid this treatment because with his centering there was no "Dead corner". However, I did add a few swirls to the background, just for fun. 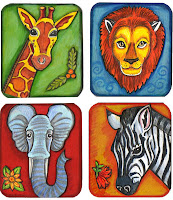 Animals are Giraffe (with acacia), Lion (with swirls), Elephant (with err, pretty flowers, maybe some sort of daisy?) and Zebra with Tulip tree.

I also made this piece - it was actually my first experiemental piece. It's slightly 3d. 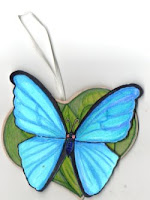 These are beautiful, and what a thoughtful gift! Perfect for a child's room! I love the bold colors for the backgrounds ^__^

You mgiht be able to gues s who the person in question is. She doesn't actually know yet!

I like the animal plaques. The butterfly one is STUNNING!