Today was mostly spent getting the dummies designed and printed for the traading card game. It's going to be a thing! How exciting! If you wish to know more, put in pre-orders or what-not, please drop me an email. Playtesting will begin next weekend if all goes well.

Consequently, today's critter almost didn't get drawn. But, here he is in his speckled brown glory - another of the New Zealand fish Galaxias tribe, the third Galaxid I've drawn. 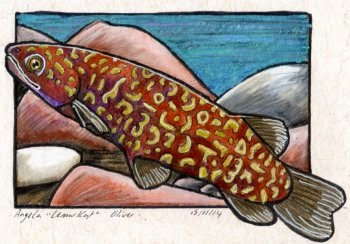 The largest of the NZ Galaxids, this Giant Kokopu spends the majority of his life living off the coast, although some populations have become locked into freshwater streams. He is the only native fish able to withstand the trout intrusion, but even so, his numbers are declining. When the time comes to spawn, the fish swim a little-ways up the river, find themselves a nice shady bank to shelter under and do the deed. The young fry swim out to sea as part of the whitebait run. An opportunistic feeder, he dines upon invertebrate prey - both larval and terrestrial - and will take the occasional other fish, especially if he is "land-locked".
Posted by LemurKat at 10:35 PM

All the best for the card game