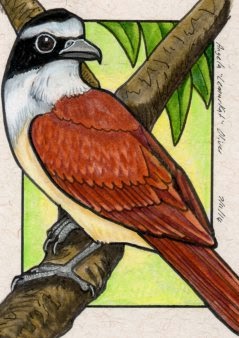 The Kiskadee is one of the largest Tyrant Flycatchers. He inhabits America, southwards from Texas and down through into central Argentina. Bold and brash, he is a common sight and has happily colonised urban areas. An opportunistic omnivore, he will pounce on rodents and insects, as well as  plucking fruit from the branches. To protect his territory, he aggresively mobs any raptors that might pass over, calling loudly in the process and thus alerting any potential prey to the presence of the predator.

(I'm not sure who wrote the wikipedia article for this bird, but they have a slightly pretentious edge to their tone, which makes it rather a delight to read).