I was going to draw a Koi, then realised I had more-or-less covered them with "Carp". So here, instead, is my amphibian for K. 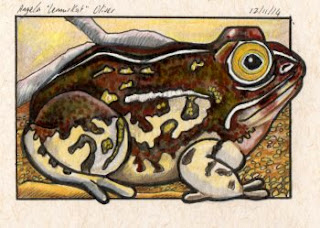 The Knocking Sand Frog of Africa, was first discovered in 1973. Following a period of heavy rainfall, large numbers appear in the Kruger National Park. He is named for his distinctive call, which one must conclude from his name, sounds rather like someone knocking. He favours sandy soils, and inhabits disturbed areas. He breeds in temporary waterbodies, presumerably after the floods. Information seems to be pretty skint, mostly the same wikipedia article (which doesn't indicate if his discovery is linked to the heavy rainfall mentioned above), but I shall delve further into detail tomorrow, if possible.

I have started designing trading cards with these creatures, and have the vaguest idea for a game, but no real concept of the game plan as of yet. It is tremendously fun to create them though!

Here's my favourite so far, the kingfisher: 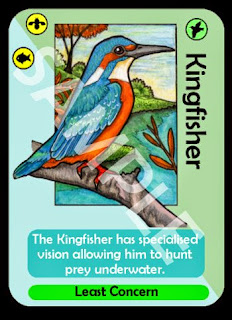 The yellow logos indicate his diet - fish and insects, with the green one indicating his "type" (small bird).
I suppose I should add amphibians to that diet chart, and reptiles... Hrm, some of the omnivores will likely fit anywhere! For simplicities sake, we'll stick with fish and insects for now. Of course, this means that the frogs might end up not being eaten by _anything_.

Perhaps there should be bonus points for players that create the longest food chain!