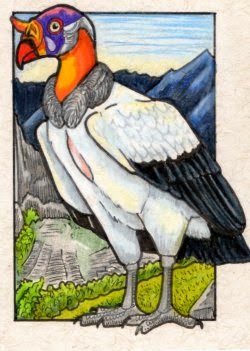 The King Vulture makes his home in Central and South America. He favours lowland forest and is usually seen near swamps or waterways. Like most vultures, he feeds predominantly on carrion, although may take the occasional newborn or injured animal. His bill is powerful, used to rip into the thick hide of a carcass, which also enables the smaller vultures to also gain access. His naked head and neck are an adaptation to his diet, feathers would become soiled with blood and this could lead to infection. He lacks a voice box, and is capable only of emitting wheezing grunts, croaking and clacking his bill.