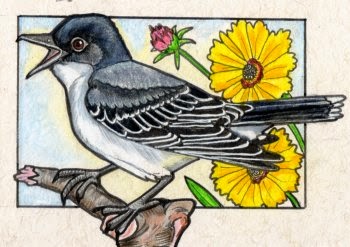 Kingbirds are ten different species from the flycatcher Family, Tyrannus. This is an Eastern Kingbird. He hunts by "hawking" - snatching his insect prey on the wing. He and his mate construct a cup-shaped nest in a tree or atop a pole. Despite being relatively small in size, the Kingbird is noted for being rather aggressive, especially towards predatory birds such as crows. This has earned his alternate name, "tyrant flycatcher". They have also been shown to recognise the eggs of the cowbird - a brood parasite - and remove these from their nests.