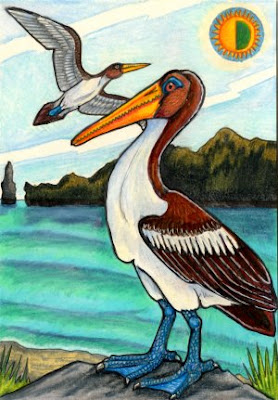 What is this strange bird that looks like it has flown from prehistory? It is a False-toothed Pelican, a long-extinct bird known only from fossil records. The False-toothed pelican, or Pelagornis, were a widely distributed genus of birds, represented by two species in Aotearoa.
They are considered relatives of pelicans, cranes or waterfowl. My depiction is based on a mix of Marabou stork, Australian Pelican and a life-sized replica of what this bird may have looked like. The advantage of illustrating a long-extinct species is that I can colour it up however I like. Mine somewhat resembles a blue-footed booby. Skeletal evidence indicates that some species may have had a wingspan of over 5 metres, and it has been suggested that their bone structure makes them unable to flap - meaning they would have been pure gliders.Taking off and landing would be quite an ordeal.A Chilean specimen, discovered late 2010, was the largest bird ever to fly.The beak is serrated around the edges, an adaptation found to be useful in seizing and holding prey - such as slippery fish.These mighty and powerful beasts become extinct somewhere between 5-10 million years ago.Alas, little has been found of their remains, as their bones are very brittle and deteriorate quickly.

I first learned of the false-toothed pelican only a few weeks ago. A friend and I were visiting a local wildlife park - Willowbank - in which they had what I shall refer to as "the path of the Dead". That is to say - life-sized woodcuts of various extinct NZ species. There were two of these pelicans - one standing by the side of the path looking fierce, and the other soaring above it. With its over-three-metre wingspan and strange beak, I thought it a pterosaur at first, but further observation lead to a correct identification.
Posted by LemurKat at 8:24 PM